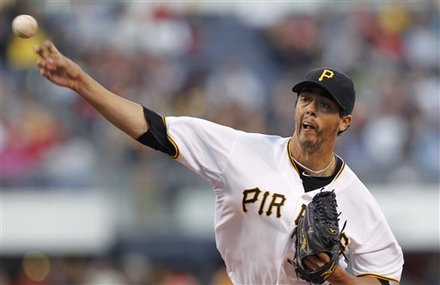 Pittsburgh 2 Philadelphia 0.  No that was not the final of the Buccos game tonight, that score marks the win total for the Pirates and Penguins over the Phillies and Flyers respectively on this Easter Eve Saturday.  After the Penguins won 4-2, the Pittsburgh Pirates decided to get a little revenge on the Philadelphia Phillies after they spoiled the home opener on Thursday.

Tonight’s game was eerily familiar to that season opening game.  Both Jeff Karstens and Cliff Lee pitched gems tonight.  Karstens would work six innings allowing one run on five hits with a walk and two strikeouts.  That one run would come in the first inning after two lead off singles and a sacrifice bunt, Hunter Pence would single home Shane Victorino.  Karstens would then strike out Laycne Nix and induce a flyout to centerfield to John Mayberry.  This would pretty much be it for rough innings as four out of the next five innings pitched would be 1-2-3.

Lee was just as if not more so dominant.  His night would also consist of six innings with one earned run given up on two hits while striking out four and walking two batters.  The only hiccup of the night for Lee came in the sixth.  With runners on second and third, Lee would throw a wild pitch that brought home Yamaico Navarro to tie the game at one.

After not settling things in nine innings, these cross state rivals headed for extras.  The Buccos made sure that this would not be a late night as things would come to an end in the tenth.  Rod Barajas led the inning off with a double that hit off the top of the wall in center field.  Michael McKenry would then pinch run for Barajas.  McKenry then reached third on a sacrifice single by Clint Barmes.  This was followed by Josh Harrison being hit by a pitch and Jose Tabata popping out to second.  With two outs and runners on the corners, Alex Presley hit a routine ground ball to Jimmy Rollins; the only problem for Rollins was that Presley has speed coming out of the box.  That speed led to a safe call at first and McKenry crossing home for the game winning run and a 2-1 victory.

After a tough loss on Thursday, great to see the Pirates even things out tonight and raise the jollyroger for the first time in 2012.  The rubber match of this series is set for Sunday at 1:35pm.  Hopefully the Pittsburghoffense can show some life and give starter James McDonald some run support as he faces off against Vance Worley.