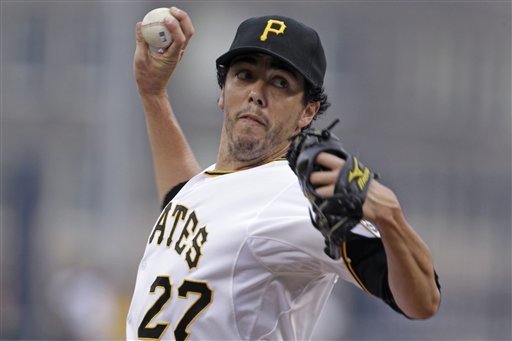 Tonights 2-0 win for the Pittsburgh Pirates over the Houston Astros did not have a ton of runs, hits, or a walk off excitement like we have become use to seeing over the past few weeks. This game tonight looked more like an April or May win.  Not much offense, some wasted opportunities to blow the game open and top notch pitching.

Jeff Karstens pitched his third game since coming off the disabled list tonight and looked great on the mound.  Eight innings of work, zero runs on four hits, while striking out eight and walking one batter.  Another amazing stat was that after eight innings of work he only threw 89 pitches.  It was also big that of the four hits he gave up, multiple hits were not given up in an inning.  Need to appreciate a great night on the hill when we see it.

Astros pitcher Bud Norris didn’t have a bad night at the office either, it’s just that he doesn’t have much of a team to support him, sound familiar?  He would go seven innings allowing two runs on five hits with six K’s and three free passes.  The first of those runs came in the second when Casey McGehee doubled home Garrett Jones.  The final run of the game came in the third when G.I. Jones hit a warning track sacrifice fly that brought in Karstens.

Now even though the Buccos won, and I don’t want to sound picky with a team that is in first place, ten games over .500, but there were some down points to tonight’s action.  First off Pittsburgh had the bases loaded with one out in the third with 4-5-6 due up and they only managed one run.  Andrew McCutchen looked human tonight; going 0-3 with a walk, let’s simmer down on those MVP chants, a lot of baseball left to be played.  Finally Joel Hanrahan has been a little off the mark lately.  Twice tonight he walked a batter in the ninth bringing the tying run to the plate, not exactly lights out, but he did collect the save.  Again not being critical just pointing out facts.

The sweep tonight, gave Pittsburghtheir first four game sweep of Houstonsince 1979 which is also the last time the Pirates won the World Series, coincidence?  So after playing a down and out team like the Stros, the Buccos will host a legitimate National League contender in the San Francisco Giants for three games this weekend.  This will be another one of those series that gives Pittsburgh an opportunity to show if they are for real this season.  A series win of the Giants will give fans more reason to believe in the bucs.  Game one will feature Erik Bedard taking on former Cy Young award winner Barry Zito.  First pitch is scheduled for 7:05.