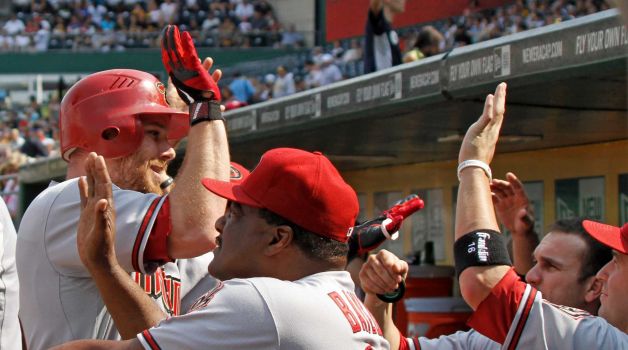 Overall, the first series of this eleven-game home stand against the Arizona Diamondbacks left a lot to be desired for the Pirates and their fans.  After splitting the first two games earlier this week, the Pirates held on to beat the Diamondbacks last night in an ugly game on a rainy night at PNC Park.

Today, the Bucs squandered a number of scoring opportunities, and the Diamondbacks hit three homeruns on their way to a 6-3 victory, earning the series split.

Wandy Rodriguez took the loss for the Pirates, his 11th of the season, giving up four runs on seven hits through his six innings of work.  Jared Hughes gave up two runs on three hits in the seventh inning, including a two-run homerun by Jason Kubel.  The D-Backs’ left fielder had two round-trippers and four RBIs, while catcher Wil Nieves added a two-run homer of his own in the sixth inning.

On a positive note for the pitching staff, Jeff Locke, who was called up fromIndianapolisearlier this week, pitched 2.1 innings of scoreless baseball.

Offensively, this was a game of missed opportunities for the Pirates.  They left a total of 11 men on base as a team, including the third inning, when they were unable to score any runs after having runners on first and second with no outs.  In fact, after scoring three runs in the second inning, the Bucs didn’t score another run the rest of the game.

Gaby Sanchez led the Pirates with three hits, all of them singles, while Starling Marte had another strong game, going 2-4 with a triple, single, and RBI.  Michael McKenry and Jordy Mercer had the other RBI’s for the Bucs.  Andrew McCutchen went 1-4 on the day, lowering his batting average to .369, while Neil Walker added a hit as well.

The Bucs struggled against Diamondbacks’ starter Joe Saunders after scoring a few on him early.  Saunders retired 15 straight batters at one point, on his way to earning just his sixth victory of the season.

After splitting with Arizona, the Bucs’ home stand against the N.L. West continues against the San Diego Padres.  With the loss, the Pirates are now an even three games back of the Cincinnati Reds in the N.L. Central.  This is a huge series for the Bucs to continue to gain ground in the division while hopefully expand their lead in the Wild Card race.  First pitch for tomorrow’s series opener against the Padres is slated for 7:05pm.