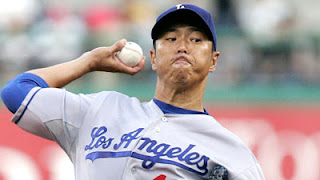 After a rough outing on Tuesday, the Pirates were looking to increase run production and receive another solid start from Paul Maholm. The Buccos’ left hander wouldn’t fail, but the bats ran into a hot pitcher as the Los Angeles Dodgers sent Hiroki Kuroda to the hill.
Kuroda pitched seven solid innings and fooled the Buccos all night.  He had a no-hitter go into the fifth when Brandon Wood hit a broken-bat single to left field.  On the night, Hiroki allowed three hits, no runs, walked three and struck out eight.
Maholm once again pitched a great game, going six innings while allowing two runs on five hits with five walks to three strikeouts.  The sixth inning was his only hiccup of the night.  After two walks and a single, Juan Uribe grounded into a double play that scored Ivan De Jesus Jr.  Clint Hurdle called for an intentional walk on Rod Barajas.  This led to a Jerry Sands double that made the score 2-0.
The bullpen had a good night with Daniel McCutchen, Jose Veras and Joe Beimel each pitching an inning of scoreless baseball.  This was needed after they have been hit with runs the past couple games.
Our offense is still in a slump.  They managed only four hits and with our leadoff, three, four and five hitters going a combined 0-13.  This is unacceptable for this team to be wasting quality outings like this and many others this season.  I find it ironic that with a former pitching coach as manager, that the Pirates are hitting the ball so poorly this season.
has a very important game tomorrow as they will look to tie the series and have a winning home stand before going on the road for seven games.  Charles K. Morton takes the hill for the Buccos with the first pitch scheduled for 7:05.
Record Vs. Dodgers: 1-2
Record Vs. N.L. West: 7-9
Record At Home: 7-11
Overall Record: 18-19
And…
As Always…
Let’s Go Bucs!