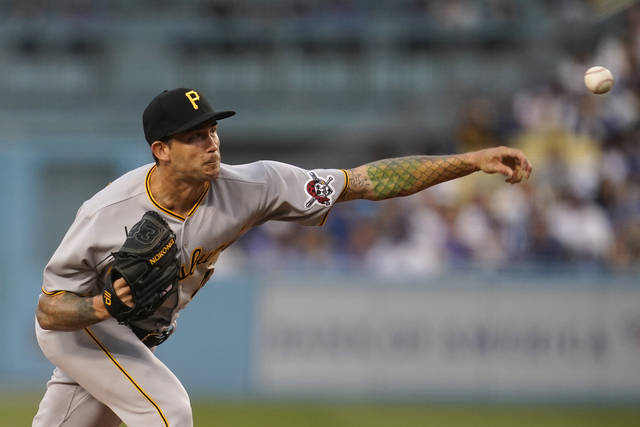 The Pittsburgh Pirates began a three-game series against the Los Angeles Dodgers on Monday night at Dodger Stadium, and it was some late-night heroics by the home team that gave them a 2-1 edge over Pittsburgh.  A stellar start from Steven Brault was all for naught, because of a Pirates offense that couldn’t get much going against a Los Angeles team that used a total of six pitchers on the night.

The Dodgers have had a slew of injuries to the pitching staff this season, though you wouldn’t be able to tell looking at their record.  Because of this, they would skip using a typical starting pitcher on Monday night and go with a bullpen by committee.  Justin Bruihl started the game and allowed one hit while just pitching the first inning.  Andre Jackson pitched the longest, going four innings and giving up two hits to go along with four walks and five strikeouts.

Brault did all he could to keep a loaded Los Angeles offense from scoring.  He would pitch 5.2 innings and allow three hits, while striking out four and walking just one.  Brault was replaced by Nick Mears, who walked a batter before collecting the final out of the sixth.  In the seventh Pittsburgh would collect their lone run of the night when Gregory Polanco scored on a throwing error by Cody Bellinger on a ball put in play by Wilmer Difo.

The Dodgers road to victory would begin for them in the bottom part of the seventh.  Anthony Banda would serve up a solo home run to Billy McKinney to tie the game at one.  This would give Banda his second blown save of the season.  He would complete the inning and pick up two strikeouts in the process.  The winning run for Los Angeles came in the eighth on a Max Muncy solo home run off of Chasen Shreve.

It’s tough to win games when you only score one run and only have five hits to go with it.  One of those hits came from newly acquired Bucco Yoshi Tsutsugo.  He was added to the roster on Monday after John Nogowski was designated for assignment.  This series will continue on Tuesday and will see Wil Crowe of the Pirates take on David Price.  First pitch is slated for 10:10pm.