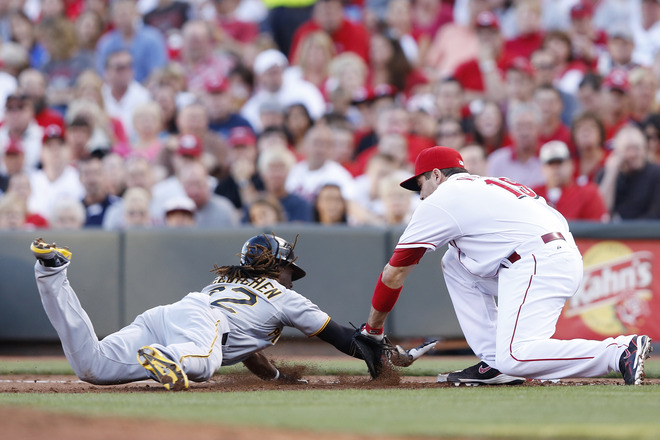 Last week, the Pirates faced Johnny Cueto and the Cincinnati Reds at PNC Park.  Cueto, as usual, was nearly dominant against the Bucs, but A.J. Burnett was equally impressive on the mound forPittsburgh, and Matt Hague’s two-run double proved to be the difference in a 2-1 Pirates’ victory.

Tonight, the Bucs faced Cueto again, and he was as solid as ever.  The difference was, Pittsburgh’s starter Brad Lincoln was shaky throughout, and the Reds took advantage, building an early lead, survived a late surge by the Bucs, and won the game, 5-4, at Great American Ballpark.

This was a step in the wrong direction for Lincoln, whose role has been questioned and changed throughout his stint with the Pirates.  Coming into this game, he had an ERA a hair over 1.00, and had performed very well in spot starts.  Tonight, though, he struggled against the aggressive Reds’ hitters.  He was tagged for five runs on six hits in just four innings.  With Jeff Karstens on the mend, it’ll be interesting to see where Lincoln fits in the rotation.  But this was clearly not what he, or the Pirates, had in mind for tonight’s start.

Brandon Phillips hammered a solo homerun in the second inning, while Ryan Ludwick smacked a bases-clearing double in the fourth, scoring Joey Votto, Phillips, and Todd Frazier.  Ryan Hanigan added an RBI single as well, which ended up being the difference in the game.

The bullpen was solid tonight, preventing the deficit from getting any larger.  Doug Slaten tossed three innings of shutout baseball while only giving up one hit, and Jared Hughes pitched a scoreless eighth.

Offensively, the Pirates struggled for the majority of the game, with the exception of the eighth inning.  Rod Barajas and Pedro Alvarez led off the frame with a double and single, and after Cueto got Josh Harrison to line out and struck out Alex Presley, Neil Walker knocked him out of the game with an RBI single.  Reds’ manager Dusty Baker opted to put Logan Ondrusek in the game to face Andrew McCutchen, who hammered a 0-1 pitch over the fence in right center to bring the Pirates within a run.

That’s as close as they would get, though, as Matt Hague, Casey McGehee, and Barajas went peacefully against the Reds’ Aroldis Chapman in the ninth inning.

As most good teams do, the Reds responded from last night’s loss with a solid victory tonight.  Cueto has always had the Pirates’ number, and that continued tonight.  The Bucs’s pitching staff has given up a total of nine runs to the Reds in the last two games.

The two will face off in the rubber match of the series tomorrow at Great American Ballpark.  Kevin Correia will make the start for the Bucs against Cincy’s Mike Leake.