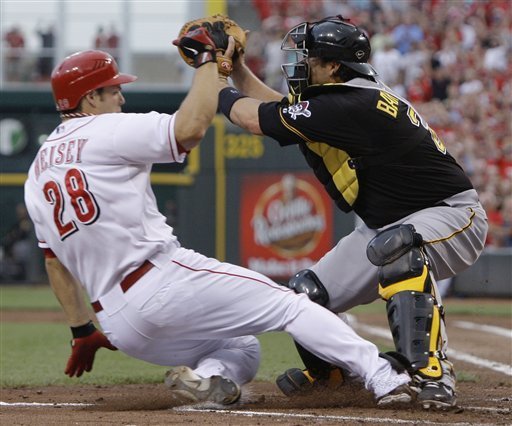 The Pirates and Reds entered this weekend’s series at Great American Ballpark knowing what this series was all about.  Sure, the Reds had a 3.5 game lead over the Bucs, and the Pirates were in the lead for one of the two wild card spots.  But this series was about a test…to see where the Pirates stood among the ranks of the best in baseball.  The Reds entered tonight’s game with the league’s best record, and they’ve been playing the best of all the division leaders in either league.

The Reds had won 20 of their last 23 games by scoring a lot of runs, but tonight, they didn’t need much offense.  Mat Latos made the start for Cincinnati tonight, and the Pirates’ batters simply couldn’t solve him.  After battling control issues in the first inning, Latos cruised up and down the Pirates lineup, tossing a four-hit shutout through his 7.1 innings of work.  After newly acquired Jonathan Broxton cleaned things up in the eighth, Aroldis Chapman pitched the ninth for his 24th save of the season.

Wandy Rodriguez pitched a decent game tonight for the Pirates, giving up three runs on seven hits through seven innings, while Chad Qualls pitched a scoreless eighth inning in his first appearance as a Bucco.  Rodriguez gave up an inside-the-park homerun to Chad Heisey in the second inning and a two-run homerun to Latos in the fifth inning.  Wandy fell to 7-10 on the season with the loss.

The Pirates offense struggled the entire night, tallying just four this as a team.  Andrew McCutchen went 1-3, maintaining his MLB leading batting average at .373, and he was hit by a 101 mph Chapman fastball in the ninth.  Pedro Alvarez, Michael McKenry, and Rodriguez had the other hits for the Bucs.

This was not the type of game we expected by either team..  The Reds are simply white hot right now, and when a team is playing this well, they just seem to win games every which way each time they take the field.  The Pirates fall to 4.5 games back in the N.L. Central, and will need to respond tomorrow night to even the series.  James McDonald will take the mound for Pittsburgh against Cincy’s Mike Leake.  First pitch is slated for 7:10pm.