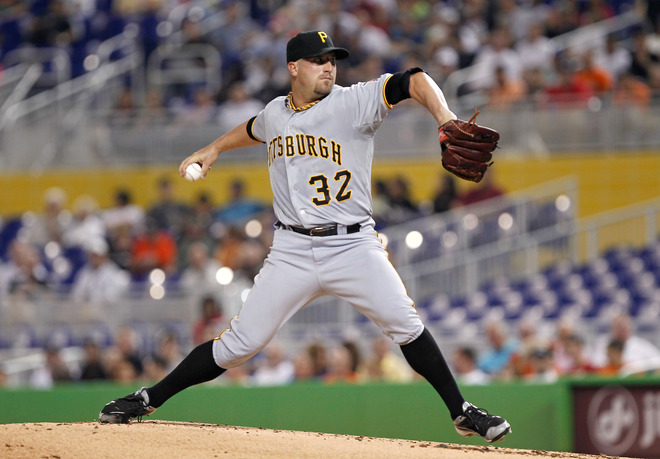 After an exciting walk-off ending to their nine-game home stand, the Pirates jumped on the road and headed down south for a seven game trip, beginning with a short two-game set against the Miami Marlins.  The Fish were one of the more discussed and highly publicized teams in baseball in the offseason, and despite a somewhat lackluster start to the season, still looked to be a good challenge for our Buccos.

Rod Barajas had a pair of hits, including a homerun, while Pedro Alvarez hammered a go-ahead RBI double in the sixth inning, as the Pirates outlasted the Marlins in Miami tonight, 3-2.

Brad Lincoln has had his ups and downs as a starting pitcher in his Major League career.  So it’s safe to say we really didn’t know what to expect from tonight’s game against the Marlins.  Filling in for Erik Bedard, Lincoln tossed six innings, giving up just two runs on four hits while walking one and striking out three.  After giving up a monster homerun to Hanley Ramirez in the first inning, Brad settled in and, despite allowing a handful of runners on base throughout, was able to keep the Marlins at bay, and more importantly, keep the Bucs in the lead.

And once again, the bullpen was impressive tonight, keeping the Marlins in check for the final three innings of the game.  Jared Hughes and Jason Grilli pitched scoreless seventh and eighth innings respectively, while Joel Hanrahan came in and earned his seventh save of the season.  Miami had a serious chance to tie (or take the lead) in the eighth, but after getting himself into trouble with runners at the corners and one out, Grilli struck out Logan Morrison and got Giancarlo Stanton to pop out to end the inning.

The Bucs certainly didn’t light up the scoreboard tonight…but do they ever?  Despite tallying only six hits, they managed to put together some necessary runs and muster up enough offense for their continued solid pitching staff.  It was a great sign to see Barajas put a couple of hits up on the board, including his solo homerun in the second inning.  We all know he has power, but we’re finally starting to actually see it.  Clint Barmes, Jose Tabata also added a hit a piece.  Andrew McCutchen was his usual dangerous self at the plate, hitting the sacrifice fly that scored Tabata in the first, and, after singling in the sixth, scored on Alvarez’s double.  As for Pedro, he did have the big go-head hit & RBI, but he also struck out three times.

With the victory tonight, the Bucs have now won three games in a row, and are now just one game under .500. Lincoln improved to 3-0 on the season, pitching six solid innings.

What an impressive way to begin what promises to be another difficult road trip for the Pirates.  They are now in position to possibly sweep this short two-game set, which concludes tomorrow night at Marlins Park.  Kevin Correia will take the hill for the Bucs against the Marlins’ Josh Johnson.