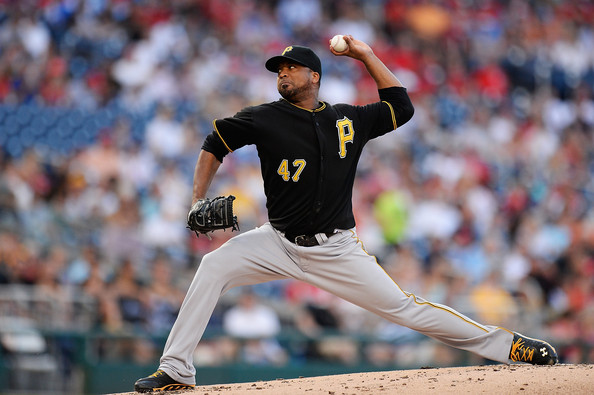 Tonight’s matchup between the Pittsburgh Pirates and Washington Nationals featured an enticing pitching matchup between Francisco Liriano and Stephen Strasburg.  This was an important game for both teams.  For the Pirates, it was a chance to win their fourth straight game and clinch the series victory.  And for the Nationals, they needed to come out on top to snap a five game losing streak.

At Nationals Park tonight, Liriano was just a little better than Strasburg, and the Pirates added a few late runs to clinch a 4-2 victory over the Nationals in front of a crowd that increasingly looked and sounded like it was PNC Park.

Liriano was masterful tonight for Pittsburgh, pitching into the eighth inning, while earning his 10th win of the year.  He didn’t give up his first hit until the sixth inning, and held the Nationals’ hitters in check throughout the night.  In all, Francisco gave up just two hits and three walks, while striking out eight, in 7.2 innings of work.  He has earned a decision in every game he has started this year (10-4), lowering his ERA to 2.23 on the season.

Pedro Alvarez crushed a line drive homerun to right center field off Strasburg in the second inning to give the Bucs an early 1-0 lead.  That would remain the score until the top of the ninth inning, when the Pirates would added a trio of runs for what was thought to have been a comfortable bottom half.

Neil Walker’s RBI double scored Starling Marte from first.  After an intentional walk to Alvarez and after Jose Tabata was hit by a pitch, Michael McKenry hit a two out, two-run single, scoring Walker and Alvarez, extending the lead to 4-0.  As it turned out, the Bucs would need every bit of that lead.

Justin Wilson gave up a two-run homerun to Jayson Werth in the bottom of the ninth to cut the lead in half, 4-2.  Mark Melancon came in and struck out one batter before giving up a one-out single to Wilson Ramos.  But Denard Span slapped a ground ball to Walker, who, appeared to miss the tag on Ramos before tossing to first to get Span out.  However, the second base umpire saw things different, saying that Walker did tag Ramos.  The end result was a 4-2 victory for Liriano, Melancon, and the Pirates.

Not to state the obvious, but once again, this was a huge win for the Pirates to win tonight.  Liriano was incredible, out-dueling Strasburg, who brought his “A” game as well.  Alvarez hit his 26th homerun of the season, tying for the National League lead.  Marte snapped an 0-20 stretch with a single in the ninth inning.  And McKenry once again had a huge hit to put the Bucs over the top.

Pittsburgh will go for the series sweep tomorrow afternoon.  A.J. Burnett will take the mound for the Bucs against the Nats’ Gio Gonzalez.  First pitch is scheduled for 12:35pm.