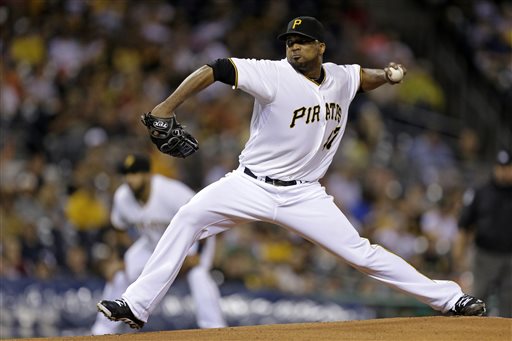 Entering tonight’s game at PNC Park, fans of the Pittsburgh Pirates were panicked.  After all, the Bucs had lost four straight games and, following their second consecutive 2-1 loss to the Oakland Athletics last night, had lost three straight series.  The main culprit for the recent slide has been the lack of run support, which has spoiled two solid performances this week by Jeff Locke and Gerrit Cole.

Tonight, after a 2 hour, 50 minute rain delay, the Pirates’ bats came alive, building an early lead, and starter Francisco Liriano baffled the Athletics’ hitters all night long.  When all was said and done on a rainy PNC Park field, the Bucs wrapped up their Interleague series with a 5-0 victory over Oakland.

Liriano was dominant tonight, giving up just four hits through seven innings, walking one and striking out six while lowering his ERA to an even 2.00 for the season.  Justin Wilson and Jeanmar Gomez pitched the eighth and ninth innings, respectively, closing out the game and giving the Pirates their first ever victory over the A’s.

The Pirates got on the board first with back to back doubles by Starling Marte and Jose Tabata to lead off the third inning.  Andrew McCutchen’s RBI single followed, scoring Tabata and giving the Bucs a 2-0 lead.  Pedro Alvarez added an RBI single later in the inning, and the Bucs held a 3-0 advantage after three.

Russell Martin helped the Bucs add on in the fourth inning with an RBI single, scoring Tabata from third.  Alvarez tacked on another run-scoring single, sending McCutchen home.  After four innings, the Pirates were in complete control, 5-0.

This was a strong response by the Pirates tonight in a game in which they really needed to win.  The offense showed signs of life for the first time in what seems like forever.  The Bucs tallied 12 hits as a team, including four players with multi hit games – Marte, Tabata, McCutchen, and Alvarez.  With the victory, the Pirates salvaged a game in the series, but will need to play better baseball this weekend in order to snap their three-series losing streak.

After a day off tomorrow, the Bucs will welcome in the New York Mets to PNC Park for the final series before the All-Star Break.  Charlie Morton will start for Pittsburgh on Friday against the Mets’ Jeremy Hefner.  First pitch, baring yet another rain delay, is set for 7:05pm.