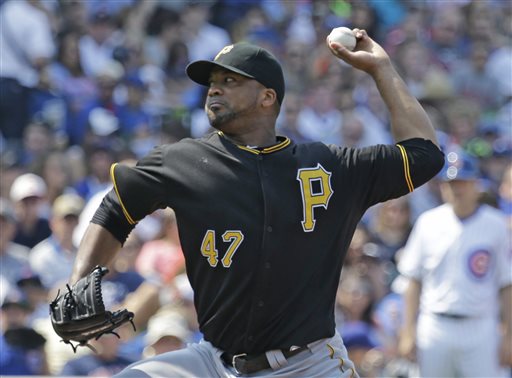 Francisco Liriano was one of those offseason acquisitions that no one was very sure about heading into spring training.  Those questions lingered even further when he began the season on the disabled list.  But since he came off the DL, he has been solid for the most part.  Today, however, he was brilliant, tossing his second career complete game, and the first by a Pirates pitcher this season.

Liriano was dominant on the mound, and the Pirates bats got to Chicago starter Jeff Samardzija early and often, beating the Cubs 6-2 in the first game of the weekend series at Wrigley Field.

Liriano helped out his own cause and got the Bucs on the board first with a two-out single off Samardzija in the second inning.  After the Cubs scored two in the bottom half of the inning, Pittsburgh responded in the third.  After Starling Marte reached first base with a bunt single, Neil Walker hammered an RBI triple to right centerfield.  Andrew McCutchen then drew a walk, and Garrett Jones smashed a run scoring single to right, scoring Walker from second.  A double steal by Jones and McCutchen gave the Pirates a 4-2 advantage after three.

Pittsburgh added another run in the fifth inning.  Jones got things started with a one-out triple, and scored on Jose Tabata’s infield single.

Liriano improved to 8-3 on the season with the win today, giving up two runs on four hits with seven strikeouts.  His ERA now sits at 2.20 for the season, and he’s been yet another bright spot for this Pirates pitching staff.

Offensively, it was a group effort for the Bucs, who tallied a total of 13 hits.  Marte led the way with three hits, while Jones and Tabata each had a pair.  The Pirates are a better team than the Cubs in all aspects of the game, and they proved it this afternoon.

Today’s win at Wrigley was a nice response by the Pirates who certainly didn’t play their best baseball last series against the Philadelphia Phillies.  They’ll look to clinch the series victory tomorrow afternoon against the Cubs.  First pitch is scheduled for 4:05pm.