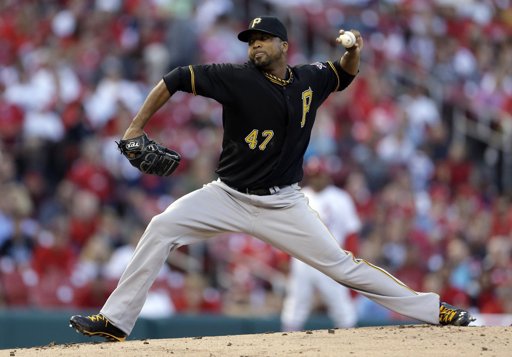 Baseball is the ultimate rollarcoaster ride and this only becomes clear when you are a fan of a team that has not had a winning season in twenty years.  Francisco Liriano was a huge part of stopping a four game slide tonight and that was big after he was lit up in his last start.

Frankie would go the distance tonight allowing only one run on four hits while striking out six and walking one.  Liriano showed that the last game was a fluke and that he is the real deal.  He looks like a pitcher that wants the ball when his team is on a slide and going up against a tough opponent.  Outings like these need to be carried by the rest of the rotation if this team wants to continue their playoff push.

Now even with that great pitching performance, the bats would need to come alive for this to hold up.  The bats came to life early in the game and did not look back from there.  Pedro Alvarez struck again with a solo homer in the second inning.  Two batters later, Garrett Jones would join the home run party with a solo shot of his own to right field.

The offense would show more signs of life in the fourth inning, not with the longball, but with timely hits.  Tony Sanchez drove in Neil Walker with a single to left.  After Liriano bunted the runners to second and third, Starling Marte would drive both of them home with a double to center.  Those five runs were plenty with the way Frankie was pitching.

Rubber match tomorrow and when the series started I would have been happy with one win, but with the way the Cincinnati Reds have been playing, the Pittsburgh Pirates need to keep winning.  After today, the Pirates are 3.5 games up on the Reds and 3 games up on the St. Louis Cardinals.  Game time tomorrow is 1:45pm.