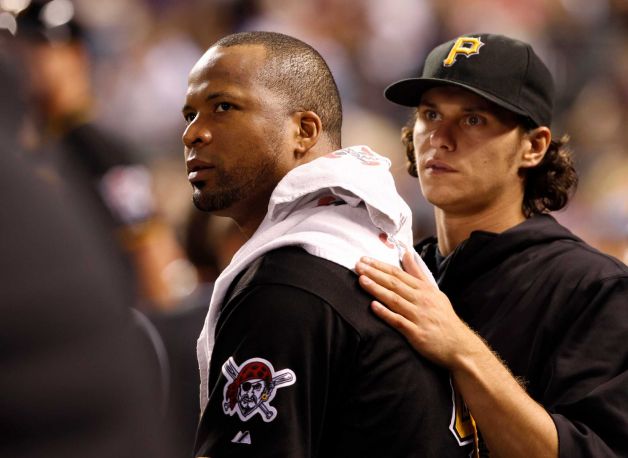 Francisco Liriano made his first start at the home of the Colorado Rockies tonight and I doubt he is eager to make a second.  Liriano had by far his worst start of the year, lasting 2 1/3 innings, giving up ten runs on twelve hits while walking two and striking out one.  Even with the massive amount of runs he gave up, his ERA is only up to 2.83.

Even with the short outing, the bullpen only used two pitchers out of the shark tank.  Vin Mazzaro would last 2 2/3, and then be replaced by Jared Hughes for another 2 2/3.  Josh Harrison made his pitching debut tonight and recorded the final out of the eighth on a fly ball to left.

The Pittsburgh Pirates offense had three opportunities to keep the pace with Colorado.  They had the bases loaded three times during the first two innings.  The first time occurred with one out that would lead to Pedro Alvarez striking out and Gaby Sanchez grounding out.  Inning two would see the Buccos load the bases twice.  The first time would result in a Jordy Mercer sac fly to give Pittsburgh their only run of the game.  The second time would see Russell Martin ground out to end the threat.

Overall just a rough night for Pittsburgh, hopefully it was just a case of jet lag and it is all out of their system before the start of tomorrow night’s game.  On a good note, the Cubs beat the Cardinals, so the Pirates still hold a 4 game lead in the division.  A.J. Burnett will toe the rubber tomorrow night with first pitch scheduled for 8:10pm.