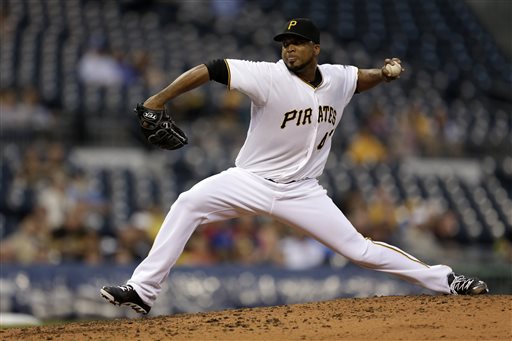 Last night, the Pittsburgh Pirates needed a pinch hit grand slam by Travis Snider to beat the Chicago Cubs in the opening game of the teams’ three game series.  This evening, however, all they would need was an RBI single in the first inning, as they out-pitched the Cubs to a 1-0 victory at PNC Park.

Tonight’s game featured an enticing pitching matchup – Jeff Samardzija for the Cubs and Francisco Liriano for the Pirates.  Both pitchers were solid tonight, challenging one another to a duel on the mound throughout the evening.

Liriano pitched seven stingy innings, giving up just two hits and one walk while striking out nine batters.  His combined ERA in his three starts this season is an even 1.00.  Samardzija, too, was on point, going deep in the game, as he always does when he pitches against the Bucs.  He gave up just one earned run on three hits with one walk and eight strikeouts in seven innings.

The Pirates took the lead in the first inning on an RBI single by Garrett Jones, scoring Andrew McCutchen.  And from that point forward, pitching and defense dominated the rest of the game.  Tony Watson came up and pitched the eighth inning, stranding a runner at second base with a strikeout of Anthony Rizzo.

The Cubs threatened in the ninth inning off Mark Melancon, who gave Jason Grilli some rest after last night’s long outing.  After Alfonso Soriano reached base on a wild pitch strikeout, Nick Schierholtz grounded into a fielder’s choice and Welington Castillo singled, the Cubbies had two runners on and only one out. But Melancon set the next two batters down in succession, clinching the Pirates’ 1-0 victory.

This was another big performance for the Pirates.  The offense struggled tonight, which has been the case as of late, but the pitching was once again solid.  Liriano was magnificent, going deep in the game, giving the bullpen some rest.  Watson and Melancon, while not incredible, got the job done.    This is a long season, and the offense will have its ups and downs.  The good thing is, right now, while the Bucs’ offense is struggling, they’re still winning games.

The two teams will conclude their series tomorrow afternoon at PNC Park.  Jeanmar Gomez will start for Pittsburgh against Edwin Jackson for Chicago.  First pitch is scheduled for 12:35pm.