Locke and Longball Finish Off Cardinals 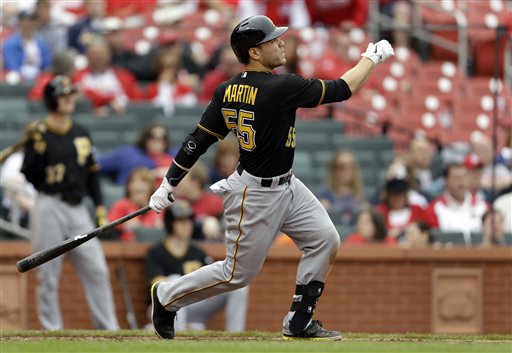 It is funny how things work out during the long season that is baseball.  Friday night the Pittsburgh Pirates had their manager and starting pitcher thrown out of the game before an out was recorded and their bullpen was pressed into action for the next eight innings.  On Saturday they fight all game long and once the St. Louis Cardinals lifted their starter from the game, the Buccos came from behind for the win.  Today, Pittsburgh got a second straight very good outing from starter Jeff Locke and had a multitude of contributions from the offense to down St. Louis 9-0 and win the series.

Locke, who had been a bit of a question mark before his last start, came out looking like a seasoned veteran today in picking up his third win of the year.  He never seemed to be in trouble during his seven innings of work, where he allowed three hits, struck out four and walked two.  All of sudden now the Pirates appear to have another quality lefty in their rotation.

The Bucco Bats were on display today as they used the long ball to their advantage throughout the course of the game.  Russell Martin went deep twice today.  Thie first was a solo shot in the second inning and he would then hit a two run shot in the ninth.  Jose Tabata hit his solo dinger in the fifth, that would be followed up by Garrett Jones leaving the yard in the seventh.

A few other players added to scoring outburst today.  John McDonald  doubled home Brandon Inge in the sixth inning.  The five run ninth started on a ground out by Gaby Sanchez that plated Clint Barmes.  That was followed by Pedro Alvarez singling in Starling Marte and Jones.

With guys like Andrew McCutchen, Neil Walker, and Travis Sinder out of the lineup today, it was great to see this offense flourish with nine runs and thirteen hits.  With the win, the Pirates currently hold a .5 game lead in the division as they prepare for a three game series with the Milwaukee Brewers tomorrow night.  Wandy Rodriguez toes the rubber for the Buccos and he will face Yovani Gallardo.  First pitch is scheduled for 8:10pm.