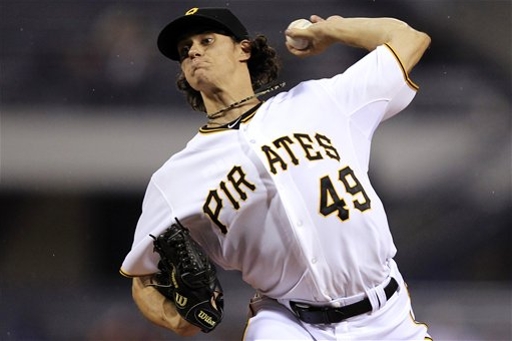 It’s been a horrible stretch for the Pirates, but tonight, things finally seemed to go their way a bit.  Starting pitcher Jeff Locke earned his victory MLB victory, while the Pirates won their 78th game of the season, they most since 1998.

Ok ok…we know that doesn’t make Pirates fans feel any better about the second half collapse for the second consecutive season.  With the 2-1 victory over ex-Bucco Paul Maholm, however, the Pirates eliminated the Braves from contention for the N.L. East crown.  Any better?

Probably not.  Locke did finally get his first MLB win, a great feeling for him.  Overall, the Bucs’ pitching staff was solid, allowing just two hits against one of the highest powered offenses in baseball.  Locke tossed six innings, followed by great appearances by Jeff Karstens, Tony Watson, and Jared Hughes, who earned his second career save.

Starling Marte was the offensive star of the day for the Pirates, going 2-4 with a homerun, a triple, and a run scored.  Chase d’Arnaud had an RBi, while Andrew McCutchen and Jose Tabata each added a double.

The Pirates now sit at 78-82, and with two games left in the season, they do maintain a chance of reaching the 80-win mark.  Pirates fans, do you find any solace in 80 wins?  We shouldn’t…but still, it would be nice for the Bucs to end the season by winning a series against a playoff caliber opponent.

The two teams will face off tomorrow in the final night of the season at PNC Park.  Kevin Correia will take the hill for the Pirates against the Braves’ Tommy Hanson.