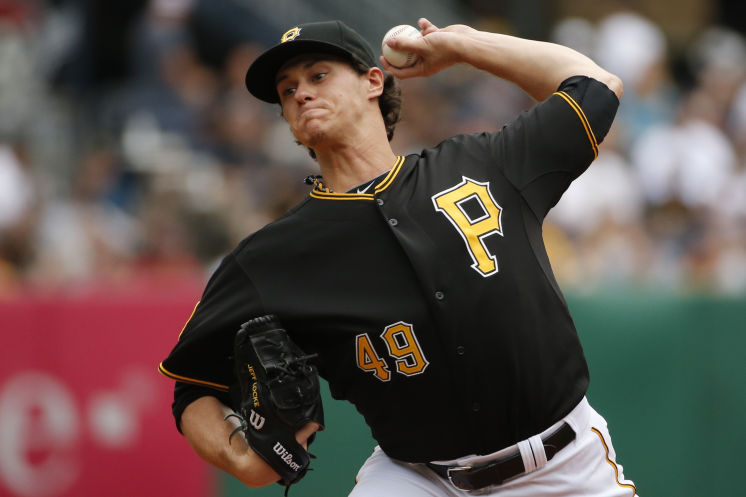 For the first time in a long time, the Pittsburgh Pirates have a winning record.  After a 6-3 victory over the Tampa Bay Rays tonight at Tropicana Field, the Bucs sit with a 39-38, thanks to a superb performance from Jeff Locke and a well-rounded offensive attack.

Prior to the game, Neil Walker was activated and Jose Tabata was optioned to Triple A Indianapolis.  During the game, the lineup was altered again, as Starling Marte was injured and removed from the game in the fifth inning. Travis Snider finished the game, but one has to wonder, depending on the severity of Marte’s injury, if we could be seeing Tabata back in a Pirates uniform sooner rather than later.

Locke was solid tonight, giving up three runs on eight hits with two walks and four strikeouts through 7.1 innings.  He repeatedly induced swings at his pitches, forcing ground outs, double plays, and weakly hit pop-ups.  He did need some help in the eighth inning, being pulled after getting one out.  Jared Hughes pitched to just one batter before he was relieved by Tony Watson, who got the final two outs, giving way to Mark Melancon who earned his 13th save of the season.

The Pirates scored the game’s first run in the first inning.  Gregory Polanco led off with a walk, stole second, and advanced to third on Jose Molina’s throwing error.  Andrew McCutchen’s ground out scored Polanco, getting the Bucs on the board.

Molina’s RBI double in the fifth scored Logan Forsythe to get the Rays on the board.  Forsythe reached when Polanco lost a softly hit fly ball in the lights, resulting in a triple.  The Pirates got that run right back in the top of the sixth on an RBI single by Josh Harrison, scoring Ike Davis, who doubled with two outs.  Russell Martin’s solo homerun in the eighth stretched the lead to 6-1.

Evan Longoria hammered a two-run homerun to deep left in the eighth, spelling the end of the night for Locke.  Hughes and Watson made appearances in the eighth, cleaning things up without surrendering another run.

Tampa Bay made things interesting in the ninth inning off Melancon.  Forsythe and Desmond Jennings both singled, putting runners at first and second with one out, as Ben Zobrist, representing the tying run, came to the plate.  After Zobrist flied out to deep left center, Brandon Guyer singled home two runs, making it a one-run game with Longoria up to bat.  Fortunately for the Bucs, Melancon induced an easy fly ball to McCutchen, ending the game.

This was another big win for Pittsburgh, led by Locke, who pitched a great game once again.  This offense looks incredibly dangerous, and now with Walker back in the lineup, and hopefully Marte’s injury isn’t too severe, this could mean great things offensively for the Bucs.

The Pirates have now secured this series victory, and will look for the sweep tomorrow afternoon against the Rays before coming back home to Pittsburgh on Thursday.  First pitch tomorrow is scheduled for 12:10pm.