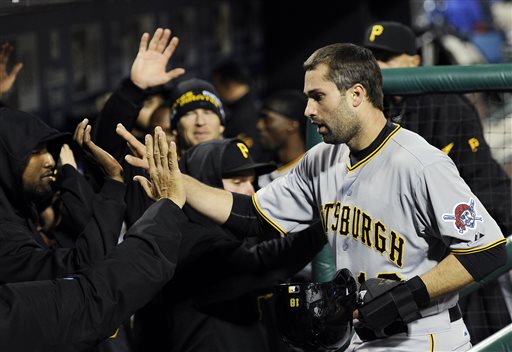 There’s no denying that starting pitching is the biggest key to how successful the Pittsburgh Pirates are this season.  Unfortunately, heading into the season, the starting pitching rotation was one of the biggest question marks for Pittsburgh.  Jeff Locke was in the middle of the uncertainty, but tonight, he pitched like a seasoned professional, tossing six shutout innings as the Pirates beat the Philadelphia Phillies, 2-0, in the second game of their four game series.

Locke pitched himself out of trouble in the first two innings, stranding a total of four runners.  He battled his way throughout the six innings of work, including a fourth inning in which he gave up a leadoff triple and a hit batsman before getting three consecutive outs to strand another pair of runners.  It was an impressive overall stat line for Locke, giving up just two hits and two walks with six strikeouts in six innings, earning his second victory of the season (2-1).

The Bucs’ bullpen, as it has all season long, was strong tonight against the Phillies’ lineup.  Tony Watson pitched a perfect seventh, and after Mark Melancon battled his way through a nerve-wracking eighth, Jason Grilli set the Phillies down in order to earn his eighth save of the season.

Pittsburgh’s offense squandered some opportunities tonight against Philadelphia starter Cole Hamels.  But they did JUST enough to eke out a victory.  Brandon Inge, making his first start of the season, delivered a huge RBI double in the fourth inning, scoring Neil Walker.  Gaby Sanchez, starting at first base for Garrett Jones, hit a solo homerun in the eighth inning to give the Bucs a much-needed insurance run.

Starling Marte had two more hits tonight, bumping his average to .321 for the season.  Sanchez had two hits, including the homerun as well as a double, while Walker, Inge, and Russell Martin had a hit each.  Andrew McCutchen went 0-4 tonight, dropping his average to just .243.

This was a big victory for the Pirates.  One night after their ace A.J. Burnett struggled and lost, they get a huge performance from a guy we certainly didn’t expect it from in Jeff Locke.  In these types of series against teams the Bucs struggle against, especially to begin a road trip, it’s important to keep things on track.  This was a great game to win, and the Bucs found a way to get it done.

After splitting the first two games of this series, Pittsburgh will send Wandy Rodriguez to the mound against the Phillies’ Roy Halladay.  First pitch is scheduled for 7:05pm.