Locke Struggles As Pirates Get Routed By Diamondbacks 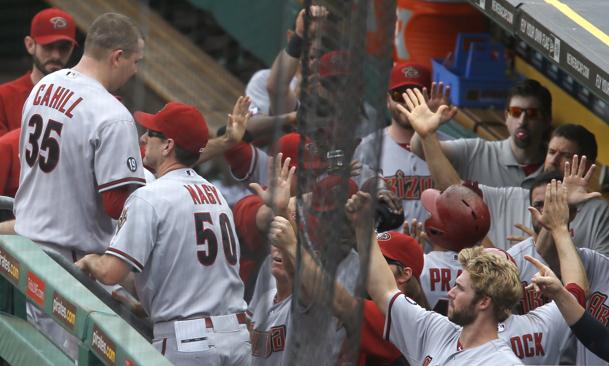 Last night at PNC Park, the Pittsburgh Pirates returned to the team we, the fans, have seen all season, which has them atop the N.L. Central division.  But this afternoon, the Bucs early, often, and hard, falling 15-5 to the Arizona Diamondbacks in front of a capacity crowd.

Jeff Locke started for the Pirates tonight, and lost his fourth game of the season (9-4) with by far the worst start of his career.  He lasted just 2.2 innings, giving up eight runs on ten hits with three walks and two strikeouts.  The Diamondbacks scored twice in the first and six in the third, chasing Locke from the game early.

The Bucs battled back in the bottom of the third with four runs of their own.  Starling Marte crushed a solo homerun to get them on the board, and later in the inning, Pedro Alvarez blasted a three run homerun to bring the Pirates within an 8-4 mark.  Jose Tabata later singled home Russell Martin in the sixth inning, and the Diamondbacks’ lead was down to just three runs.

Unfortunately, that was as close as the Pirates would get this afternoon.  Arizona scored four runs in the eighth and three more in the ninth to make this one a laugher at PNC Park, sending most of the “die hard fans” leaving early.

Offensively, it wasn’t a bad afternoon for Pittsburgh.  Andrew McCutchen led the club with three hits, while Neil Walker and Tabata added a pair each.  As for Alvarez, his homerun was his 30th of the season, becoming the first third baseman in team history to hit 30 homeruns in two seasons.

This was a troubling loss for the Pirates…not because of the score or because of who they lost to, but because it was yet another setback for Locke.  This guy has not been the same pitcher since the All-Star break, and one really has to wonder if it is because of the innings pitched situation.  He has never thrown this many innings in a given season, and fatigue could be a factor right now.

The Bucs will try to right the ship and win the series tomorrow afternoon at PNC Park before they hit the road for a west coast jaunt.  Charlie Morton will start for the Pirates with the first pitch slated for 7:05pm.