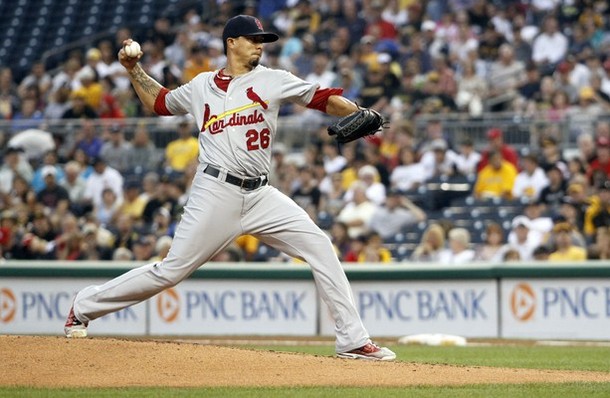 The Pirates and Cardinals faced off tonight in the first a huge three game series between the two N.L. Central teams who are vying for a Wild Card spot while chasing the division-leading Cincinnati Reds.  Entering tonight’s game, the Bucs and Cards had split the first 12 games of the season between one another 6-6, and the two teams have been extremely evenly matched thus far.  Tonight, it was more of the same, as the two teams traded punches back and forth throughout, but the Cardinals made a few more plays down the stretch, outlasting the Bucs, 4-3 at PNC Park.

Matt Holliday went 2-4 with a decisive homerun, while Yadier Molina, Skip Schumaker, and Kyle Lohse added RBI’s as the Cardinals did JUST enough to knock off the Pirates in front of their home crowd on a rainy night in Pittsburgh.  As for Lohse on the mound, he improved to 14-2 on the season, giving up two runs on five hits in five innings before a half hour rain delay.

A.J. Burnett was slightly better than he had been in his last few starts, but he still gave up four runs (three earned) on seven hits through 5.2 innings.  He, too, was pulled from the game during the rain delay.  With the loss, Burnett fell to 15-5 with a 3.67 ERA on the season.

The Pirates looked much better offensively than they have recently, but were only able to push three runs across the plate, leaving a total of 13 runners on base.  Andrew McCutchen had two singles and an RBI, while Pedro Alvarez and Clint Barmes each added a pair of hits as well.  Barmes and Josh Harrison had the other two RBI’s for the Bucs in the losing effort.

The bullpen, which had been struggling as well, pitched much better tonight.  Jared Hughes, Jason Grilli, and Tony Watson each had scoreless appearances, but the Cardinals had already done just enough damage on Burnett.

This was another difficult loss for the Pirates tonight…their sixth loss in seven games.  Which is more frustrating…a game like yesterday when they’re dominated from the beginning, or a game like tonight that was close throughout and they came up just short? One thing is for sure…the Pirates need to win tomorrow night’s game.  This is a huge series against a team they’re chasing right now in the standings.  After a difficult loss tonight, the Bucs need to respond positively tomorrow, just as they’ve done all season long.