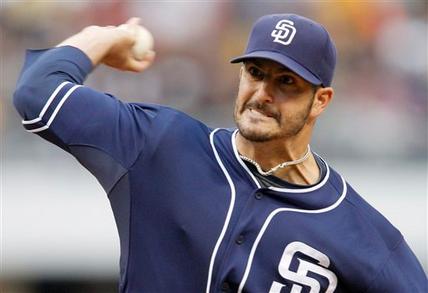 Should we be hitting the panic button yet, Pirates fans?  After a heartbreaking 9-8 defeat to the San Diego Padres last night at PNC Park, the Bucs were looking to get back on track in front of a sold-out Saturday night crowd.  And who better to be on the hill in an important game the Pirates needed to win than A.J. Burnett, the ace of the pitching staff with a 14-3 record entering tonight’s action.

Unfortunately for the Bucs and their fans, however, Burnett was not at his best, struggling throughout his 5.2 innings of work, as the Padres shut out the Pirates, 5-0.

This was another disappointing performance by the Pirates tonight.  Just 24 hours after they scored eight runs on eleven hits, the Bucs’ offense couldn’t muster a single hit off Padres’ starter Jason Marquis until the seventh inning.  Marquis earned his sixth victory of the season with a complete game two-hit shutout, striking out four batters, walking one, and utilized the solid play of his defense.  Travis Snider and Pedro Alvarez managed the only two hits for the Bucs tonight…Snider later left the game with a sore right hamstring.

As for Burnett, he’s been by far the most consistent and dominant pitcher on the staff this season, but tonight he struggled from the beginning.  He suffered his fourth loss of the season, giving up five runs (four earned) on nine hits through 5.2 innings.  A.J. did strike out ten batters, but the dagger in his night came when he walked in Chase Headley with the bases loaded to score the game’s fifth and final run.  Headley was once again the offensive leader for the Padres tonight, going 1-4 with a homerun and three RBI’s.  Jared Hughes and Jason Grilli pitched scoreless baseball in their appearances tonight.

With the loss, the Pirates have fallen to 63-50 on the season and have already lost this series against the Padres.  They have now lost three games in a row, while San Diego has won six straight.  After another hitless game tonight, Andrew McCutchen is officially in a slump…his average is now .363 for the season.  Neil Walker also had a hitless evening, as did most of the rest of the team.  Just like last night’s game was one to forget for the pitching staff, tonight was one to forget for the offense.

The Pirates will look to bounce back tomorrow afternoon and avoid the sweep against the Padres.  Erik Bedard will be on the mound for Pittsburgh, with the first pitch scheduled for 1:35pm.