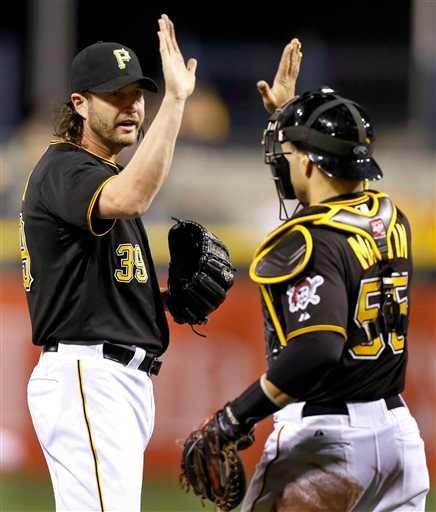 One of the main themes to this young 2013 season for the Pittsburgh Pirates is their resiliency and their ability to respond to adversity.  After a horrible performance last night in a 9-1 loss to the St. Louis Cardinals, the Bucs responded this afternoon with an impressive performance, and a 5-3 victory at Busch Stadium.

A.J. Burnett started for the Bucs today, who were in dire need of a long start after Jonathan Sanchez was thrown out of last night’s game without recording a single out.  Burnett did what he always does….he battled…pitching six innings, giving up two runs on five hits with three walks and six strikeouts, while earning his second victory of the season (2-2).

Tony Watson and Mark Melancon pitched scoreless seventh and eighth innings respectively, while Jason Grilli, although giving up his first run of the season, did notch his tenth save.

Russell Martin was the hitting star of the day for Pittsburgh, going 2-4 with a homerun and two RBIs.  His two run homer in the seventh inning brought home Pedro Alvarez, tying the game, 2-2.  After a bases-loaded walk drawn by Andrew McCutchen, Garrett Jones smacked an RBI ground-out to give the Bucs a 4-2 lead.  Gaby Sanchez’s sacrifice fly in the eighth scored Martin from third, giving the Bucs another insurance run, pushing the lead to 5-2.

This was a great response by the Pirates today at Busch Stadium.  Burnett pitched a strong game, limiting the damage at times, and the bullpen once again was called upon to shut things down in the latter innings.  While they have done a great job so far, it is still worrisome that they are being used at such an extreme rate this early in the season.

McCutchen continued his struggles today, going 0-4, lowering his batting average to just .216 for the season.  I know it’s early, and this is Cutch we’re talking about, but still….the team needs him to hit.  Alvarez swung a nice bat today, adding two hits, bumping his average up to .195.  Martin also had two hits, as did Clint Barmes.

The Bucs and Cardinals will wrap up their three game series tomorrow afternoon at Busch Stadium with a 2:15pm first pitch.  Jeff Locke will take the mound for Pittsburgh against Shelby Miller for St. Louis.