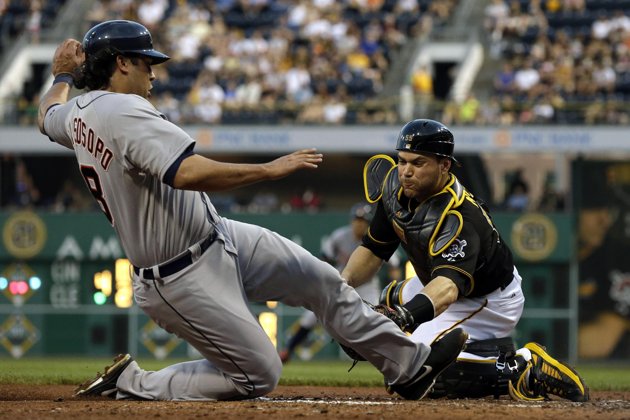 What is it about these Pittsburgh Pirates?  As has been the case quite a bit recently, the Bucs used superb pitching and timely hitting from Russell Martin as they defeated the Detroit Tigers, 1-0, tonight at PNC Park.

Jeff Locke led a pitching staff that pitched well in intense situations against a killer Tigers lineup.  While it wasn’t his most efficient outing, Locke kept the Tigers off the scoreboard, giving up seven hits and one walk in his 5.1 innings of work.  Vin Mazzaro, Tony Watson, Justin Wilson, Mark Melancon, and Bryan Morris combined to pitch 5.2 innings of scoreless relief.

Locke got himself into trouble in the fifth inning, giving up an oddly high number of seeing-eye singles, resulting in the Tigers having the bases loaded with only one out.  But, as he’s done this season, Locke got himself out of it, inducing ground balls to the Bucs out of the inning without any damage being done.

After giving up a single and a walk in the sixth, Locke was pulled in favor of Mazzaro, who set down the next two Tigers hitters in order to end the threat.

For the third consecutive inning, the Tigers had a great opportunity to score.  Once again, they had runners on first and third with only one out.  But, Mazzaro forced a shallow pop out and an inning-ending ground out to once again escape.

Neil Walker got things started in the 11th inning with a leadoff single, then Andrew McCutchen took a four-pitch walk and Gaby Sanchez smacked a single to load the bases with no outs.  Martin crushed a shot to the wall, scoring the game-winning run to clinch yet another series victory.

Not to state the obvious…but what a huge victory for the Pirates.  This series pitted the Bucs against one of the very best teams in all of baseball, and they took three of four games against them.  How high is their confidence right now?  It should be through the roof…and they’ll need it, as they welcome in the Cincinnati Reds to PNC Park beginning tomorrow night.  First pitch is at 7:05pm.