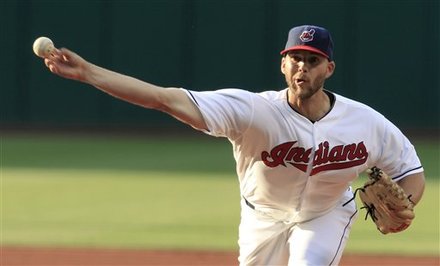 As Clint Hurdle said after last night’s game, the Pirates couldn’t wait to leaveBaltimore.  After being swept by the Orioles, the Bucs needed a strong performance this weekend against the Cleveland Indians.  Unfortunately, the offense went back into hibernation, falling victim to a suddenly-masterful Justin Masterson, as the Pirates lost to the Indians, 2-0 at Progressive Field.

The Pirates managed just five hits total tonight, but they had multiple scoring opportunities throughout the game.  After stranding a runner in the first inning, they loaded the bases in the fourth inning after an Andrew McCutchen walk, Casey McGehee single, and Pedro Alvarez walk.  Jose Tabata, though, couldn’t even put the ball in play against Masterson, striking out to end the inning.

Two innings later, Neil Walker led off the sixth frame with a double, but the Bucs couldn’t capitalize, stranding him on base much to the Indians’ fans’ delight.  Then in the seventh, Masterson walked Tabata and hit Josh Harrison with a pitch, but with runners on second and third and two outs, Alex Presley flew out weakly to left field.  Two more runners stranded.

Then finally, in the ninth inning, McGehee led off with a single, putting a runner on for Pedro Alvarez, who flew out.  Then, with Casey still on first base, Tabata grounded softly to second base for a double play.  Game over.

Walker and McGehee had two hits each, while Harrison added a single, and that was it for the Bucs’ offense.  As a team, they did force three walks and a hit-by-pitch, but they had absolutely NO clutch hitting.  It was a disappointing performance for an offense that had performed well recently, and was the reason that the Bucs lost their fourth straight game.

James McDonald pitched very well tonight, giving up just one run on three hits through six innings of work.  After a difficult start last time out where he only lasted four innings, J-Mac returned to his old form.  Despite giving up only one run tonight and lowering his ERA to 2.32 for the year, McDonald fell to 5-3 on the season.

The bullpen, as rare as it was, gave up a run tonight.  Tony Watson pitched a scoreless seventh inning, and Jason Grilli and Juan Cruz combined in the eighth inning.  The run, which came on an RBI single by Michael Brantley, was charged to Grilli.

So the slide continues for the Pirates, having now lost four straight games.  The offense was to blame tonight.  Other than Walker and McGehee, as well as Harrison reaching base twice, the offense was horrible.  The rest of the starters combined to go 0-20.  Masterson is a good pitcher, but he hasn’t had a strong season to this point…he looked incredible tonight.

The Pirates will look to end their skid tomorrow afternoon as they face off against the Indians in the second game of this weekend series.  A.J. Burnett will take the mound for Pittsburgh against Cleveland’s Ubaldo Jimenez.  First pitch is scheduled for 4:05pm.