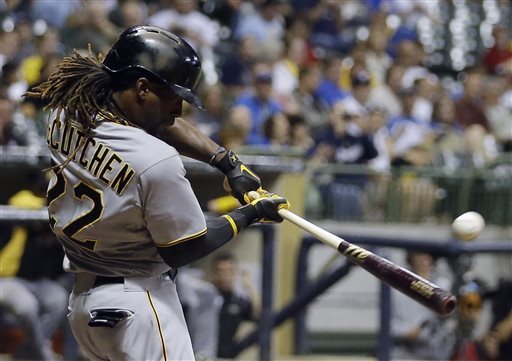 There’s no denying that Andrew McCutchen is the face of the Pittsburgh Pirates franchise.  And as the past couple of years have proven, as Cutch goes, the Bucs go.  Tonight, the all-star centerfielder had three hits and three RBI’s, as the Pirates beat the Texas Rangers, 5-4, in Arlington.

It was an impressive performance from McCutchen, who has propelled himself into the thick of the National League batting race.  Jordy Mercer had four hits and Gaby Sanchez added a pair as well, providing some clutch hitting with two outs to give starter Francisco Liriano a comfortable lead.

While he hasn’t had a great series of starts as of late, Liriano was solid tonight, giving up just one run on six hits through six innings of work.  The Bucs used a total of five pitchers tonight, including Mark Melancon, who, despite giving up two runs, closed things out in the ninth to clinch the game, and the series, for the Pirates.

After squandering scoring opportunities in the first two innings, the Pirates got on the board in the third.  Tony Sanchez led off with a double and advanced to third on Mercer’s single.  With runners on first and third,  McCutchen lined a ground ball off pitcher and Sanchez beat out the throw to home, scoring the game’s first run.

The Bucs gave themselves some breathing room in the fifth inning with some two-out magic.  Mercer tripled down the third base line, and scored on McCutchen’s single.  Marlon Byrd then singled, and Gaby Sanchez followed that up with a single of his own, scoring Cutch from second base.  Byrd then came home to score on a wild pitch.  When all was said and done in the top of the fifth, the Pirates had a comfortable 4-0 lead.

The Rangers made things very interesting in the bottom of the eighth inning off Jason Grilli.  After giving up a run and putting runners on second and third with two outs, the Bucs got a huge strikeout from Tony Watson to end the inning, holding a 4-2 advantage.

Pittsburgh added another run in the ninth on yet another RBI single by Cutch, scoring Neil Walker who came all the way home from second base.

What a huge series this has turned out to be for the Pirates.  After being swept out of St. Louis in embarrassing fashion, they have once again answered the call and have responded when they absolutely needed to do so.  They will now go for the series sweep tomorrow afternoon.  A.J. Burnett will take the mound for the Pirates against the Rangers, with the first pitch slated for 2:05pm.