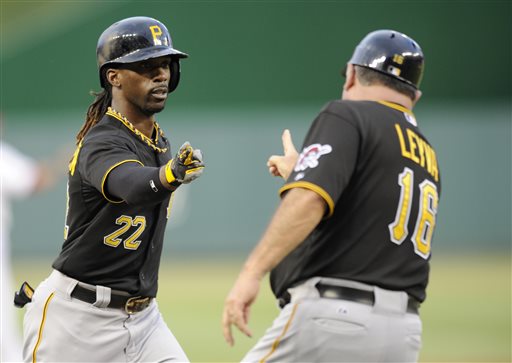 If the Pittsburgh Pirates are going to have a strong second half and seriously compete for the N.L. Central division title, they will need to be led offensively by Andrew McCutchen, Pedro Alvarez, and Starling Marte.  And while Alvarez and Marte have struggled in the handful of games since the All Star Game, Cutch is absolutely on fire.

McCutchen hit two homeruns and drove in four runs, leading the Pirates to a 6-5 victory over the Washington Nationals in the first of a four game series tonight in our nation’s capital.

Both of Cutch’s homeruns came off Washington’s starter Dan Haren, who struggled throughout his five innings of work.  Jordy Mercer forced a 1-out walk in the first inning, and scored on McCutchen’s first long-ball of the night.  In the third, Marte was hit by a pitch, and scored on Andrew’s second dinger.  Gaby Sanchez’s ground out in the fourth inning scored Russell Martin from third, extending the Bucs’ lead to 5-0.

Pirates’ starter Charlie Morton held the Nationals in check for the majority of his start tonight.  Ground Chuck gave up a solo homerun to Adam LaRoche in the fifth, and after a scoreless sixth, struggled through the seventh, and was pulled after giving up a two-run bomb to Jayson Werth.  His final line read 6.2 innings pitched, three runs on six hits with one walk and five strikeouts.

Bryan Morris and Tony Watson set the table for Jason Grilli, who was set to earn his 31st save of the season.  But, after giving up   up a two-run homerun to Werth and a 1-out double to Denard Span, things got very interesting.   Grilli struck out Wilson Ramos before leaving with an undisclosed injury.   Vin Mazzarro relieved Grilli and earned his first career save by getting Steve Lombardozzi to ground out to end the game.

Tonight was all about Andrew McCutchen playing like the star that he is, single-handedly giving his team the early lead.  The Nationals, despite Cutch swinging a hot bat, dared to challenge him, and he made them pay for it.  He now has 14 homeruns and 55 RBI’s on the season.  Mercer and Martin had two hits for Pittsburgh, while Alvarez and Garrett Jones added a hit a piece.  Marte struggled again tonight, going 0-4 with two strikeouts.

This was a great start to a very important series.  The Nationals have been underperforming all season, but they certainly have the talent and ability to compete and beat any team in the league.  With tonight’s victory, the Pirates are off to a great start with a much better chance to perhaps take three out of four from the Nats.

The two teams will get back at it tomorrow evening at Nationals Park.  Gerrit Cole will start for the Bucs against the Nationals’ Taylor Jordan.  First pitch is slated for 7:05pm.