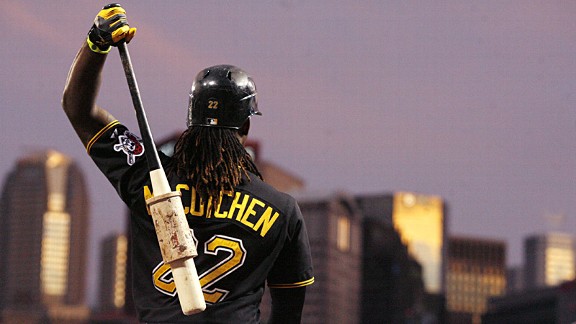 How good does this win feel?  Andrew McCutchen launched a homerun over the right center field wall in the bottom of the 12th to give the Pittsburgh Pirates a 4-3 victory over the Milwaukee Brewers at PNC Park.

The two teams went back and forth, squandering opportunities late into to the night, but the Pirates’ superstar centerfielder came up huge in the clutch moment, giving the Bucs just their second victory over the Brewers this season.

Kyle Lohse and Jeff Locke started for the Brewers and Pirates, respectively, who combined to use a total of 13 pitchers tonight.  Locke battled through that Milwaukee lineup that has proven to be so difficult for Pirates’ pitching.  The Bucs’ left hander gave up three runs on seven hits in six innings.  Vin Mazzaro earned the victory tonight (2-0), tossing two scoreless innings.

The Brewers took the lead early in the first inning on a solo homerun by Jean Segura.  The Bucs responded in the bottom half of the inning with a run, but it could have been a lot worse for Milwaukee.  After back to back singles by Starling Marte and Jose Tabata to lead off the frame, Andrew McCutchen flew out, and Garrett Jones’ ground out was enough for Marte to score.  But after Neil Walker drew a walk, Pedro Alvarez flew out to end the inning and the threat.

The Brew Crew added another run off Locke in the fourth inning on an RBI double by Carlos Gomez, scoring Ryan Braun who reached base with a double of his own.  Norichika Aoki then singled in the fifth, advanced to second and third base on wild pitches, and scored on Segura’s ground out to give the Brewers a 3-1 lead.

Our Battlin’ Buccos fought their way back in the sixth inning on Clint Barmes’ RBI ground out, which scored Walker.  Russell Martin’s RBI double in the eighth scored Walker to tie the game, 3-3.

After the two teams wasted a few opportunities in the 9th, 10th and 11th innings, McCutchen came to the plate and smacked a homerun over the right centerfield wall. Game over.

This was a huge victory for the Pirates tonight.  Not only was it an exciting walk-off victory, but it was won by the team’s all star…and it was against the Milwaukee Brewers.  Enough said.  This is one of the games you remember if you’re a fan.

The Bucs and Brew Crew will get back at it tomorrow evening at PNC Park.  Wandy Rodriguez gets the start for Pittsburgh.