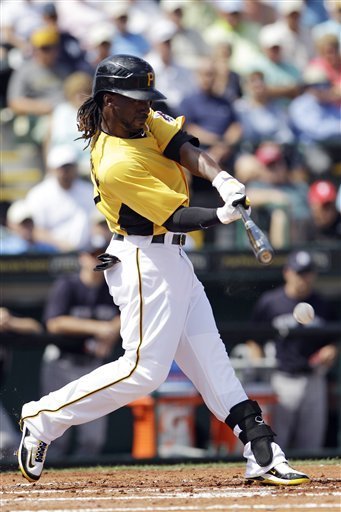 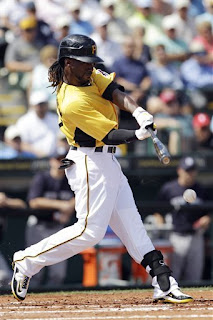 Well the days in Bradentonhave come and gone for the Pittsburgh Pirates for another year.  The Bucs returned to the keystone state for a pair of exhibition games tonight and tomorrow against their cross-state “rivals,” the Philadelphia Phillies.  Of course, they’ll open the regular season on Thursday atPNCPark, but tonight, as will be the case tomorrow, both teams were simply getting their final warm-ups in before the season kicks off later this week.
Both teams played a solid baseball game tonight, exhibition or not, and the Phillies got the last laugh, beating the Bucs 4-3 at Citizen’s Bank Ballpark.
Pittsburghdidn’t send a starter to the mound tonight, using seven relievers to pitch the nine innings.  Tony Watson, Evan Meek, and Juan Cruz each gave up a run in the first, second, and third innings respectively, while Joel Hanrahan, Jason Grilli, and Chris Resop each pitched a scoreless frame.  We all know how the game ended, but overall, the Pirates’ pitching staff did a serviceable job, giving up seven hits to the high-powered Phillies’ offense.
From an offensive standpoint, a few things remained constant.  Andrew McCutchen is still a stud, and Pedro Alvarez is still a dud.  Ok, I don’t really mean that (not yet), but the two continued their trends in opposite directions.  Cutch blasted a solo homerun in the sixth inning to tie the game at that point.  He’s hitting .304 this spring and looks like he’ll be ready to take off on Thursday towards a strong season.
Alvarez, on the other hand, went 0-3.  He’s hitting .154 this spring.  Is it a bad thing that I’m content when he flies out (as opposed to striking out)?  I think it is.  Luckily for Pedro, everyone gets a clean slate on Thursday.  I’m STILL thinking he’ll have a big year for the Bucs, but am I thinking or hoping?  We’ll see.  Jose Tabata, Neil Walker, Garrett Jones, and Rod Barajas had a hit each tonight as well.
Earlier, Daniel McCutchen and Brad Lincoln were optioned to Triple A, where they will begin the 2012 season in Indianapolis.  That leaves the lone remaining bullpen spot up for grabs amongst three relievers:  Chris Leroux, Daniel Moskos, and Jared Hughes.
The Pirates and Phillies will meet again tomorrow at Citizen’s Bank Ballpark for the final exhibition game of the 2012 spring training campaign.  Then, after a day off on Wednesday, the teams will open up their respective regular seasons atPNCParkon Thursday.
And…
As Always…
Let’s Go Bucs!