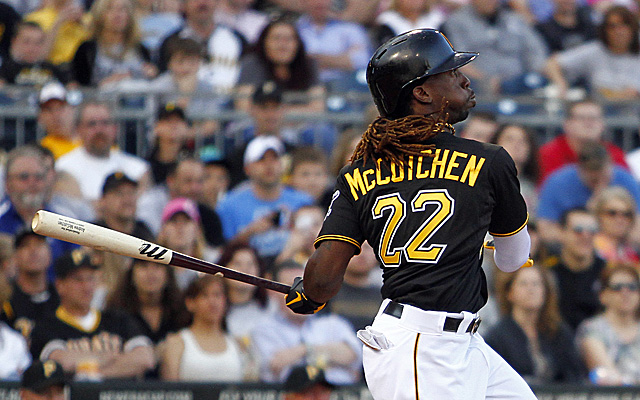 The Chicago Cubs ruined the MLB debut of Gregory Polanco with a 7-3 victory over the Pittsburgh Pirates at PNC Park last night.  Tonight, though, the Pirates took the lead early and held on to beat the Cubs in the third game of the four game series, 4-2.

Andrew McCutchen was once again the hitting star of the day for the Pirates, going 2-2 with a homerun, a double, two RBIs and two walks.  He is now batting .318 on the season and is unquestionably one of the hottest hitters in baseball.

Brandon Cumpton made the start for Pittsburgh and outpitched his mound opponent, Jason Hammel.  The Bucs’ right hander gave up two runs on five hits with two walks and five strikeouts through five innings of work.  Hammel, who was 2-0 against the Pirates this season, struggled tonight, giving up four runs on eleven hits with two walks in five innings.

The bullpen was solid for the Bucs tonight.  Justin Wilson, Tony Watson, and Mark Melancon each pitched a scoreless inning, setting the table for Jason Grilli, who set the Cubs down to close out the game.

The Pirates took the lead early on a two run homerun by McCutchen in the first inning, scoring Josh Harrison who led off with a walk.

Chicago tied the game in the second inning with a pair of runs off of Cumpton.  John Baker’s RBI single scored Luis Valbuena, and Darwin Barney’s ground out allowed Nate Schierholtz to score, tying the game.

The Bucs responded immediately with a run of their own in the bottom of the inning.  Polanco grounded out to first with the bases loaded and one out, scoring Jordy Mercer for his first MLB RBI.  They added another run in the third on an RBI single by Starling Marte, scoring Pedro Alvarez who tripled earlier in the inning.

Pittsburgh had a golden opportunity to break the game open in the fourth inning.  Polanco led off with a single and Cutch blasted a ground rule double, putting runners on second and third with no outs.  But Ike Davis lined into a double play second to third, Polanco out at home, and Russell Martin flied out to deep center to end the inning.

Despite numerous blown opportunities by the offense down the stretch, the Pirates still hung on for a comfortable victory thanks to the impressive bullpen.  Offensively, the Bucs exploded for 11 hits, including three from Mercer, two from McCutchen and Marte, and one each from Polanco, Martin, Alvarez, and even Cumpton.

The Pirates will go for the series victory tomorrow evening at PNC Park.  Jeff Samardzija will take the mound for Chicago against Edinson Volquez for the Bucs.