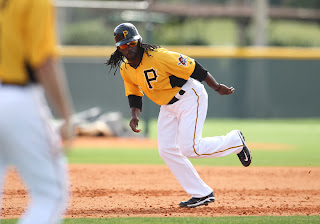 Andrew McCutchen led the Pirates to their first victory in Spring Training 2011, defeating the Tampa Bay Rays by a final score of 10-3 on Sunday.
The Pirates’ centerfielder went 3-3 with 1 HR and 2 RBI, looking sharp at the plate and in the field.  Garrett Jones, starting in right field on Sunday, also went 3-3 with an RBI.
Unfortunately, the pitching didn’t start out quite as the hitting for the Buccos.  Starter Kevin Correia gave up 2 runs on 2 hits while walking 2 in 1.1 inning of work.  Scoreless innings pitched by Ryan Beckman, Brian Burres, Joel Hanrahan, Jose Veras and Tony Watson kept the Rays in check throughout much of the ballgame.
After surrendering the lead in the top of the inning, The Pirates tied the game in the bottom of the 1st on McCutchen’s first homerun of the spring.  The scoring continued in the 4th when Jones doubled in McCutchen to tie the game at the time, 2-2.  Later in the inning, Ryan Doumit doubled Jones home to give the Pirates the lead for the first time in the game.
The Pirates extended their lead in the bottom of the 5th on doubles by McCutchen and Pedro Alvarez, and following Jason Jaramillo’s solo blast in the 8th inning, the Rays were all but buried.
It’s always nice to see the younger Buccos get into the scoring action and that’s exactly what happened in the late innings on Sunday.  Chase d’Arnaud had an RBI single and Andy Marte smashed an RBI double, scoring Josh Rodriguez and Corey Wimberly.
Despite giving up a run in the final frame, Chris Leroux did eventually shut down the game for the Pirates, earning them their first victory of the spring.
The Buccos will continue their Spring Training schedule on Monday, engaging in two split squad battles against the Rays as well as the Baltimore Orioles.
Be sure to check back here daily for all the latest updates on the Pirates’ Spring Training results!
And…
As Always…
Let’s Go Bucs!