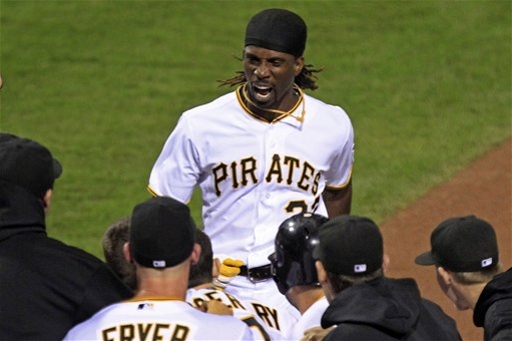 This has been a horrible ending to what was once thought could be an exciting season.  The Pirates’ free-fall in 2012 has actually surpassed that of 2011, and over the past few weeks, it’s been a struggle to find any satisfying moments on the field.

Tonight, the Pirates gave the sold out crowd at PNC Park some excitement, as Andrew McCutchen crushed a solo homerun over the wall in the ninth inning to give the Bucs a 2-1 walk off victory over the Reds.

McCutchen, like the Pirates, has fallen on hard times as of late, and as even found his batting title in serious jeopardy to the Giants’ Buster Posey.  While he was just 1-5 tonight, his only hit was the biggest one of the night, his 31st homerun of the season.

Kyle McPherson started for the Bucs tonight, and matched Reds’ starter Mike Leake pitch for pitch.  Each starter gave up just four hits through six innings, leaving the game tied until the bottom of the seventh, when Alex Presley broke the scoreless tie with an RBI double.  After the Scott Rolen’s RBI single tied the game in the eighth, Jason Grilli shut things down to keep the game tied with two huge strikeouts.

McCutchen’s homerun brought the crowd to their feet…something they haven’t been able to do in quite some time.  It was one of those special moments in a month that has been absolutely dreadful.  Joel Hanrahan, who pitched the ninth inning, earned his fifth win of the year.

The Pirates won their 77th game of the season tonight, and with just four games remaining, they’ll try to take the series from the Reds tomorrow before welcoming Chipper Jones and the Atlanta Braves to town for the season’s final series.