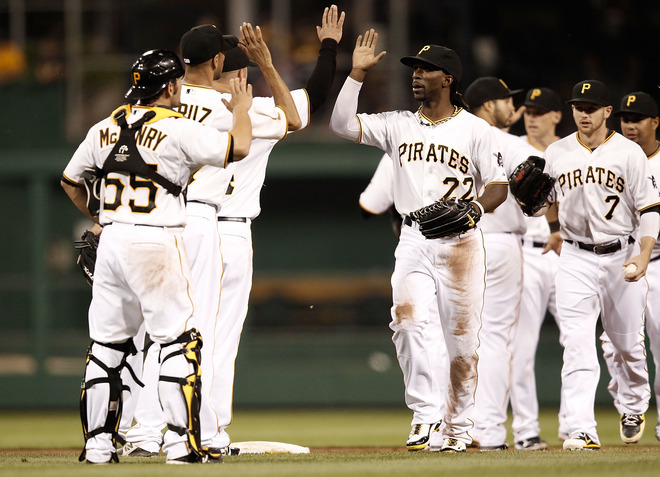 Without a doubt, last night’s game was one of the more frustrating in recent years.  And because of that putrid performance, the Bucs found themselves in a situation where they had to win to even the series against the Houston Astros.

Tonight, the Pirates responded, led by a shaky-yet-solid performance by Charlie Morton, while the offense showed some pop, using the long ball to beat the Astros, 5-2 in the second game of the series.

Andrew McCutchen led the way, going 4-4, including a homerun and three singles, while Jose Tabata also added a long ball.  After jumping in front early on Neil Walker’s sacrifice fly in the first inning, which scored Tabata who led off the ballgame with a triple, the Pirates slowly built a lead that turned out to be insurmountable.  After Houston cut the lead to 3-2 in the sixth, the Bucs responded by manufacturing two more runs, with a little help from a wild pitch, scoring Casey McGehee.

Pedro Alvarez went 1-3 tonight with a double and a walk, and other than McGehee’s hit, the offense was limited for the most part.  Clint Barmes, despite picking up an RBI on a sacrifice fly, continued his struggles tonight.  The Pirates’ shortstop went 0-3 and is now batting .153 for the year.

Morton pitched a solid game, although he did run into trouble several times throughout the night.  He surely outpitched his mound opponent J.A. Happ, giving up only two runs (one earned) on seven hits through six innings.  Yes, for once, the starting pitcher had offensive support, and Charlie was able to pick up his second victory of the season.

The bullpen was impressive and stingy once again, pitching three innings of shutout baseball.  Chris Resop and Tony Watson combined to put the Astros away in the sixth and seventh innings, while Juan Cruz pitched the ninth, earning his third save of the season.

This was a big win for the Pirates against a team that they should defeat.  After last night’s terrible performance, it was important for them to respond the way they did.  They were in control of this game throughout, and they beat a team that, for once, has less talent.  They still have unfinished business, though.  With one game remaining in this series, the rubber match, the Bucs need to finish off this home stand on a winning note as the upcoming road trip will be another challenging one.

The Bucs will face a familiar (and difficult) foe in the Astros’ Wandy Rodriguez, who will be opposed by A.J. Burnett.  The first pitch for this Mother’s Day matchup is scheduled for 1:35pm.