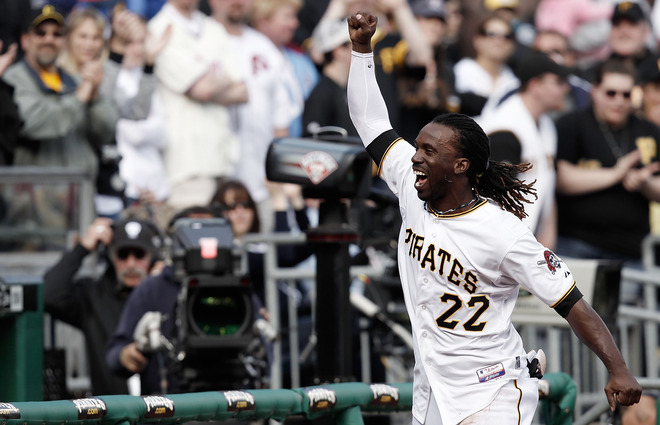 One of the key elements of the Pirates tremendously improbable first half of the 2011 season was being able to find ways to win close games.  This weekend’s series against the Philadelphia Phillies featured three one-run games, and the Bucs were able to win two of those contests.

The Pirates overcame a 4-1 seventh inning deficit to rally for a 5-4 walk off victory this afternoon at PNC Park.  With the win, the Bucs took two of three from their cross-state rivals in the opening weekend of the 2012 weekend, sending droves of Phillies’ fans back across the PA turnpike with disappointment and bitterness.  Is anything sweeter?

James McDonald pitched six innings today, giving up two runs on four hits while walking two and striking out three this afternoon.  After Jared Hughes gave up a pair of runs in the seventh inning, Evan Meek and Joel Hanrahan pitched a hitless, scoreless, inning a piece to keep the game close.  It was especially inspiring to see Meek pitch well, who is still trying to return to his 2010 form.  Hanrahan earned his first victory of the season in his second appearance.

After a relatively slow start in the first couple games, Andrew McCutchen came alive at the plate today, going 3-4, including a two-out, full-count single in the bottom of the ninth inning, scoring pinch-running Josh Harrison to give the Pirates the 5-4 victory.  Cutch looked more comfortable at the plate each time today, tallying a double, two singles, an RBI, and a run scored.  Pedro Alvarez knocked his first hit of the season today, a solo homerun to deep right field in the fifth inning.  Casey McGehee had two doubles today, while Alex Presley, Jose Tabata, Neil Walker, and Michael McKenry each had a hit as well.

For his first career MLB hit, Matt Hague tied the game in the eighth inning, scoring McCutchen on a single to shallow left field.  Congratulations to Hague on his first hit as a Major Leaguer.

This was a great win for the Pirates, concluding a highly-competitive weekend between the two PA rivals.  As was the case last season, the Bucs and Phillies played a high-octane series at PNC Park with the Pirates winning two out of three.

Pittsburgh will head out west this upcoming week for three games against the Los Angeles Dodgers and three against the San Francisco Giants.  As we all know, the Pirates have historically struggled out west, and with such an early trip this season, they certainly needed a strong start to this season at home, and that’s exactly what they got this weekend.

After an off-day on Monday, the Bucs will return to action on Tuesday afternoon with a matchup against Los Angeles.  Kevin Correia will make his first start of the 2012 season against the Dodgers’ Clayton Kershaw.