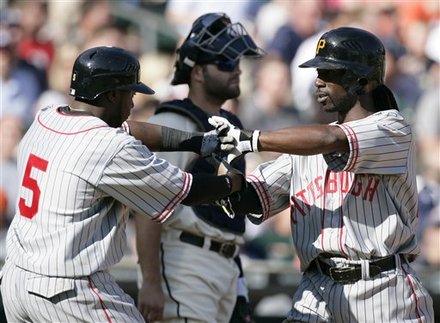 No question about it…last night’s 6-0 loss to the Detroit Tigers was one of the more frustrating performances by the Pittsburgh Pirates this season.  The Bucs managed just one hit against Detroit’s ace Justin Verlander, which happened to be a punch-hit single by Josh Harrison with one out in the ninth inning.  It was an ugly game for Pirates’ fans to watch last night, and we all couldn’t wait to close the book on game one and look ahead to today’s game.

The Pirates needed a win today, no doubt, and when a team needs a strong performance, they look to their star.  Today at Comerica Park, their biggest star, Andrew McCutchen delivered.  Cutch belted a pair of two-run homeruns in the first and fifth innings, both of which drove in Harrison, as the Pirates responded with a 4-3 victory over the Tigers this afternoon.

We, fans, as well as the rest of baseball, have known for the past two years that McCutchen is the best player on the Pirates, but lately, he’s been playing better than perhaps anyone in the National League.  He’s now hitting .346 for the season with seven homeruns and 20 RBIs.  Cutch has been hitting well all season, but due to the struggles of the rest of the team’s offense, his numbers haven’t been as impressive.  Based on this past week, however, it appears as though he’s willing to take things into his own hands and simply hit the ball out of the ballpark.

In addition to Cutch’s great day, Neil Walker also delivered with two hits of his own.  In fact, every player in the lineup today, with the exceptions of Pedro Alvarez and Clint Barmes, had at least one hit.  Alvarez and Barmes are now hitting .205 and .153 on the season.

From a pitching standpoint, the Bucs were solid against a difficult Tigers’ lineup.  A.J. Burnett earned his second victory of the season, lasting six innings while giving up two runs on seven hits.  Other than Prince Fielder’s two-run homerun in the third inning, Burnett was able to prevent the Tigers from doing much damage, while Jason Grilli and Juan Cruz set the table for Joel Hanrahan, who picked up his ninth save of the season.

This is an encouraging sign for Buccos’ fans.  Again, last night, the Pirates’ offense was dominated more than it’s been all season.  For them to respond today, behind their leader, speaks volumes about this team and McCutchen.  Now, they are in position to finish with a .500 record on this road trip, which would be a huge momentum boost as they return home to PNC Park next week.

The Pirates and Tigers will match up in the rubber game of this series tomorrow afternoon at 1:05pm.  Folks, this is a big one.