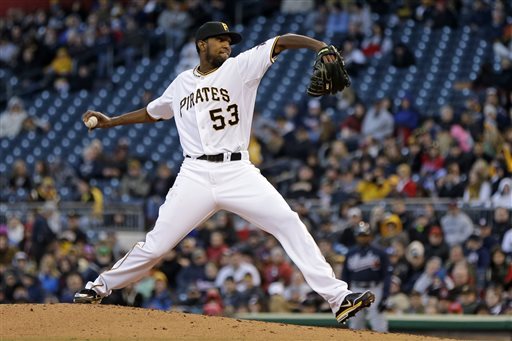 One never knows what James McDonald will appear when he takes the mound for the Pittsburgh Pirates, but tonight he stood the course to lead the Buccos to a 3-1 victory over the Braves in front of 29,313 at PNC Park.

Check out the pre-game show from the FFTS guys here:

Atlanta would strike first in the second inning.  McDonald would hit Evan Grattis and then move over to third on a double by Chris Johnson.  Dan Uggla was then walked to load the bases.  After a strikeout, Andrelton Simmons would walk to bring home the only Atlanta run on the evening.  J-Mac would get out of the inning with two straight K’s.

McDonald earned his second win of the year after pitching six innings allowing one run on two hits with four walks and nine strikeouts.  It would be great to get this kind of consistency of J-Mac to form a nice solid trio of starters with AJ Burnett and Wandy Rodriguez.

Former Bucco Paul Maholm started for the Braves.  He has had quite a start to his season going 3-0 with a 0.00 ERA.  Tonight however would be change for Maholm.  After silencing the Pittsburgh bats for five innings, the sixth inning is when the Pirates offense woke up.  Starling Marte walked to lead the inning off, Jose Tabata would lay down a sacrifice bunt to move Marte over to second.  Up next was Andrew McCutchen and on his bobble head night, he would tie things up at one with a double.  Following him was Gaby Sanchez who blasted a 409’ shot to centerfield to put the Pirates up for good.

It was now up to the bullpen to finish things up.  Tony Watson pitched a scoreless seventh inning, Mark Melancon gave up one hit and that was followed up by three straight ground outs to finish out the eighth.  That led to Jason Grilli closing out the ninth for his sixth save of the year, striking out the side.

After the Pirates closed out the victory over the Braves, the FFTS guys gave their reactions to the game:

Another great home win for the Buccos tonight.  With the win they at least split the series with the Braves and guarantee themselves a winning home stand.   Tomorrow afternoon will wrap up both this home stand and series with Atlanta.  Pittsburgh will send Jonathon Sanchez to the mound, while the Braves will counter with Kris Medlen.