McDonald Deals In Win Over Reds 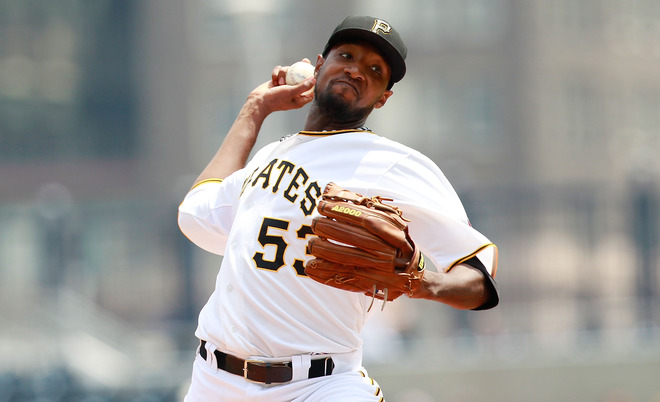 First off let me say Happy Memorial Day to all of you.  James McDonald was on top of his game today for the Pittsburgh Pirates, as he led them to victory over the Cincinnati Reds 4-1.  The Buccos extended their winning to streak to four and see themselves only three games out of first place with a .500 record.

McDonald continued to impress this season.  He would go eight innings, allowing zero runs on five hits, while striking out five and walking one batter.  It is great to see J-Mac going deep into ballgames this season, after he struggled to go past five innings last year.  The bullpen finished off the game as Tony Watson collected the first two outs of the ninth.  After he gave up a run, the hammer Joel Hanrahan was called out of the pen and collected his 12th save of the year.

The offense struck earlier and then relied on solid defense to back up McDonald this afternoon.  Two runs were scored by Pittsburghin the first inning.  Pedro Alvarez conitinued to swing a hot bat with a double to left field that scored Neil Walker for the first run of the game.  Alvarez was then brough home to score on a Garrett Jones double.

The bottom part of the second saw Walkerbring home McDonald with a two out double.  This was followed up in the third by a Rod Barajas single that brought around Alvarez to score.  The offensive output today is exactly what this team needs to be successful this season.  Score early and let your defense and pitching protect the lead throught the rest of the game.

No time for the Pirates to rest, as they will go at it again tomorrow night with the first place Reds.  Charlie Morton will take the mound for the Pirates and all of us will be looking for Chuck to show signs of his success of last year.  Cincinnati will counter with Homer Bailey who is 3-3 with a 4.19 ERA this year.  First pitch is scheduled for 7:05.