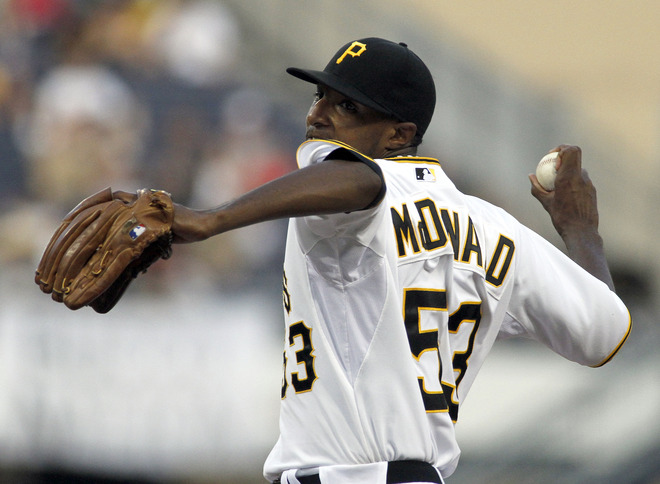 After a difficult loss last night in the first of a nine game home stand, the Pirates came out tonight looking to even the series against the Cincinnati Reds.  James McDonald looked to continue his strong start to the 2012 regular season, and that’s exactly what he did tonight in front of a near capacity crowd at PNC Park.  Was it for the fireworks or to cheer on their Buccos? Who knows for sure, but they were treated to a 3-2 win by the Pirates, evening the series at a game a piece.

McDonald was spectacular tonight, keeping the Reds in check throughout most of the game.  He gave up only one run on six hits, with two walks and seven strikeouts through his 6.1 innings of work.  In fact, the lone run he surrendered was due to the “error” on Andrew McCutchen, who misread a seemingly routine fly ball by Jay Bruce, which led to a 1-out triple.  Scott Rolen’s single drove Bruce in, and J-Mac was pulled by Clint Hurdle.

The bullpen held their own tonight for the most part.  Juan Cruz finished off the seventh inning for McDonald, while Jason Grilli did give up a run in the eighth.  Joel Hanrahan finished off the Reds in order in the ninth, earning his fifth save of the season.

Offensively, the Pirates struggled at times, but a few big hits in opportune times proved to be the difference in the game.  Neil Walker went 2-4, including a two-run homerun in the third inning to put the Bucs on the board, while Alex Presley’s solo homerun in the seventh turned out to be the game-winner.  Jose Tabata, McCutchen, and Casey McGehee added a hit each as well, but for the most part, the bats were held in check by Reds’ starter Mike Leake, who fell to 0-4 on the season.

There were a few drawbacks to tonight’s game, including Clint Barmes and Rod Barajas, who went a combined 0-7.  Barajas, despite hitting two balls really hard for outs, has fallen to .133 for the season.  It’s expected that he’ll get the day off tomorrow in favor of Michael McKenry, which is what should happen.  He’s struggling mightily right now, and McKenry is certainly no downgrade via the glove or the bat.  Pedro Alvarez went 0-2 with two walks today, while McCutchen, in his first start back since sitting out with the stomach flu, looked sluggish offensively and defensively.

This was a big win for the Pirates to win.  Even though it is still early in the season, it’s crucial for them to stay within striking distance of that .500 mark.  With the win tonight, they improve to 12-15 and have an opportunity to win this series against an N.L. Central opponent.  These are the games that matter the most, against divisional foes, and it was a nice statement by McDonald and the Pirates early on this year.

It’s rubber match time!  The Bucs and Reds will square tomorrow afternoon at PNC Park with the first pitch scheduled for 1:35pm.  Charlie Morton will start for the Pirates against Cincy’s Mat Latos.