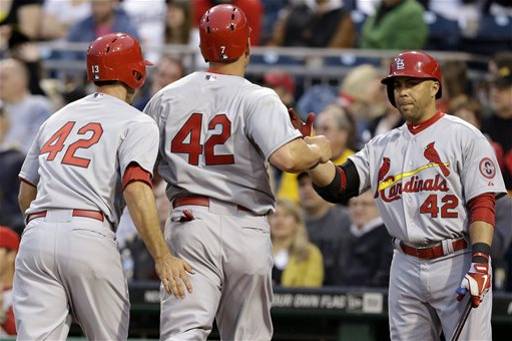 The Pittsburgh Pirates were riding high after winning three games in a row prior to beginning a three game series with the St. Louis Cardinals.  Starting for the Buccos tonight was James McDonald and as we all know from the past two seasons, there are two sides to J-Mac.

Tonight the ugly side of McDonald was on display as the starter would last only 1.2 innings.  He would give up one run in the first inning, and after the offense collected that run back, he was shelled for seven runs in the second inning.  The most surprising of this is that all seven runs came with two outs.  J-Mac’s stat line is one to forget as it would read eight runs on eight hits, three runs earned, with two walks.

The bullpen did a pretty good job putting a band-aid on this very deep wound.  Justin Wilson lasted 3.1 innings allowing two runs on one hit, while striking out one and walking two.  He was followed by Bryan Morris pitching three strong innings walking three and striking out one.  Finally Tony Watson came into to finish off the night in the ninth and only gave up one hit.

Six runs on most nights would be a pretty good evening for our Buccos offense and while it did not factor into a win, it was nice to see the team swing the bats effectively.  Starling Marte continued to swing a hot bat going 3-5 with an RBI.  Neil Walker hit his first home run of the year, a two run shot, in the third.  Jose Tabata would go 2-2 as a pinch hitter.  The surprise move of the night was Russell Martin being put at third in the sixth inning.  On the surface it looks like just a move to get the relief pitcher into the batting order where the last outwas made, but when that player being replaced is the struggling Pedro Alvarez, one has to wonder if a message was being sent.

Lets all hope that Pittsburgh can get a solid outing out of starter Jonathon Sanchez tomorrow night, so that the bullpen can get a bit of a rest and to give the Pirates a better chance of winning.  Game time tomorrow night is 7:05pm