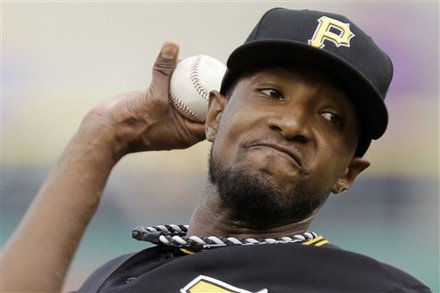 The Pirates and Mets entered tonight’s game at PNC Park as two teams hovering just above/below the .500 mark, and they both played like average baseball teams.  Both teams’ offenses struggled, leaving a combined total of 11 runners on base, the starting pitching was impressive, and neither team could take advantage of opportunities when they were given to them.  However, there was only one error in the game, and that one blemish on the Pirates’ box score turned out to be the difference in the game.

Pedro Alvarez misplayed a seemingly routine ground ball at third, tossed a throw over to first base which was not in time to get the runner, allowing the Mets’ third run of the game to score.  The Bucs fell to the Mets tonight at PNC Park, 3-2.

James McDonald had another phenomenal game for the Pirates tonight, tossing seven innings while only giving up one run on five hits, while striking out eight and walking two.  However, those two walks hurt him (and the Bucs) vitally.  J-Mac issued free passes to Daniel Murphy and Ronny Cedeno, and then, with two outs, Mike Nickeas delivered a single, scoring Murphy.  Nickeas was nailed at second base for the final out of the inning, but the damage had already been done.  It was the only run McDonald allowed in an otherwise masterful performance.

Juan Cruz took the loss tonight for the Bucs, giving up two runs (one earned) on two hits and issued a walk in the eighth inning.  The veteran reliever has been stingy this season so far, but he struggled tonight both with his control and the ability to punch batters out when ahead in the count.  It cost him and the Pirates tonight.  Chris Resop pitched the final out of the eighth and the entire ninth inning, yielding zero hits.

The offensive woes continue for the Pirates.  They could only muster seven hits and just two runs, and it always seems so difficult for them to score runs.  Tonight, they needed to manufacture one run and were also aided a bit to score their second run.  The Mets’ pitchers struck out 13 Pirates’ batters while only giving up seven hits.  It was another frustrating performance for the offense.

That being said, Josh Harrison continues to swing a hot bat, going 2-4 with a triple, double, and a run scored.  He is a spark-plug out of the dugout, looks comfortable and confident at the plate, and HAS to continue to be apart of the starting lineup in an effort to help this repulsively limited offense.  Andrew McCutchen certainly did his part offensively, adding two more hits and a pair of RBI’s to his impressive season numbers.  Neil Walker and Pedro Alvarez added a single each, as did Rod Barajas.  The Bucs, after scoring one run in the eighth, had a chance to tie the game later that inning, but with two outs and McCutchen on second base, Mets’ reliever Tim Byrdak struck out Alvarez to end the threat.

This was a game the Pirates could have certainly won, making it all the more frustrating that they came up short.  They really struggled against knuckleballer R.A. Dickey, but their 11 whiffs against him is inexcusable.  These types of offensive struggles place so much pressure on the Pirates’ starting pitchers to be nearly perfect.  The Pirates still have yet to sweep a series this season, but will have an opportunity to begin this current home stand with a winning series tomorrow afternoon at PNC Park.  First pitch is scheduled for 12:35pm, as Charlie Morton takes the mound for the Bucs.