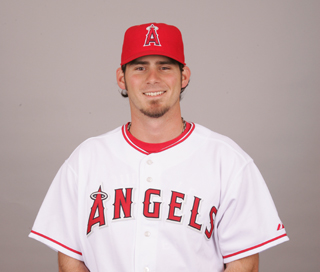 On Friday, the Pittsburgh Pirates signed shortstop/third baseman Brandon Wood off waivers from the Los Angeles Angels of Anaheim.  Many feel this move was done for two reasons.  One is to place pressure on Ronny Cedeno to perform better, and two, if Wood is able to live up to his potential as a former first round draft pick, the Pirates may have a long term solution at shortstop.
Wood was drafted 23rd overall in the 2003 draft by the Angels.  He would go on to set the California League record for homeruns with 43 in 2005 with class High-A Rancho Cucamonga Quakes.  His two doubles and triple in four games at the Triple-A level would make him the first minor league player with 100 extra base hits in a season.  In 2006, he was ranked as the third best prospect by Baseball and would spend the season at the Double-A level, hitting .276 with 25 homeruns.
2007 saw him make his Major League debut in April.  He only appeared in 13 games that year, hitting a measly .152.  He did not truly get a chance with the Angels until 2010 when the third base job opened up, since Chone Figgins signed with the Seattle Mariners.  Unfortunately, this opportunity was wasted as he wound up hitting .146 with four homeruns and 14 RBi in 81 games.  So far 2011 has been just as bad.  In six games, he has hit just .143.
On paper, this looks like another desperate attempt for the Pirates to strike gold with another team’s misfortunes.  It is possible, with the pressure to be a star player off his shoulders and new coaches teaching him, Wood could live up to the potential he showed in the minor leagues and give the Buccos some consistency at shortstop.  At worst, he fades into oblivion and becomes another answer to a random trivia question.  In order for to join the roster, Pedro Ciriaco was sent back to Triple-A Indiapolis.
And…
As Always…
Let’s Go Bucs!