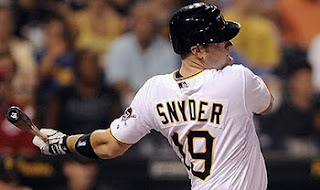 The Pittsburgh Pirates finally have the man behind the plate that they anticipated back in February.  Catcher Chris Snyder joined the Buccos tonight, meaning that Jason Jaramillo was sent down to Triple-A Indianapolis.  Snyder, who missed most of the spring with back stiffness/spasms, played in six games for and reported no problems.
Chris came to from the Arizona Diamondbacks on July 31, 2010 along with Pedro Ciriaco for D.J. Carrasco, Ryan Church and Bobby Crosby.  The Diamondbacks had chosen Snyder in the 2nd round of the 2002 Major League Baseball Draft.  He made his debut in an uniform on August 21, 2004.
For his career, he is a .229 hitter with 67 homeruns and 256 RBI.  While he will be number one on the Pirates’ depth chart, fans should expect to see Ryan Doumit behind the plate more often than a usual number two catcher.  Snyder has always had back problems during his career, so expect him to be rested whenever possible.
Be sure to check back to Fans From The Stands for more Pittsburgh Pirates roster moves as they happen.
And…
As Always…
Let’s Go Bucs!