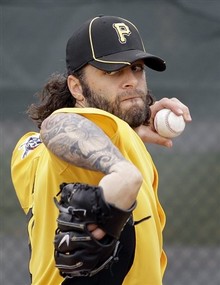 The Pirates added another piece to their big league roster today, as it was announced that left-handed pitcher Joe Beimel would be added to the 25 man roster.  In order for this to happen, the Buccos designated lefty Garrett Olson for assignment.  If Olson clears waivers the team has ten days to either trade, release, or send him to the minor leagues.  On the year, Garrett is 1-1 with a 2.08 ERA, 4 K’s and 3 walks in 4.1 innings of work.
Beimel was a free agent signing by the Pirates during the offseason after spending parts of the past two seasons with the Colorado Rockies.  This is not his first time with his home town team.  Joe was drafted by the Buccos in the 18th round of the 1998 draft and made his Major League debut in April of 2001 against the Houston Astros.  After released him following the 2004 season, he made just three appearances with the Minnesota Twins that year.  He spent 2005 with the Tampa Bay Devil Rays.
Finally in 2006 Beimel put it all together and became a valuable member of the Los Angeles Dodgers’ bullpen.  Unfortunately right before the 2006 playoffs, he cut his hand on a broken glass at a bar in .  The Dodgers lost the series in four games.  He rebounded in 2007 when he set the Dodgers’ record for most appearances, 83, by a left-handed pitcher.
After one more year in Dodger Blue, Joe signed a one year deal with the Washington Nationals and was their set up man for the first part of the 2009 season.  In July of 2009 he was traded to the for Ryan Mattheus and Robinson Fabian.
A lot has changed for Beimel since he last put on a uniform.  He will not be looked at as a veteran of a young staff and is expected to be the main lefty to come out of the bullpen.  For his career, he has a 23-31 record with a 4.16 ERA and 315 strikeouts.
Be sure to check back to Fans From The Stands for more roster moves.
And…
As Always…
Let’s Go Bucs!