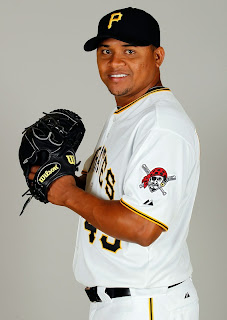 On Wednesday, the Pittsburgh Pirates brought right-handed relief pitcher Jose Ascanio off of the disabled list and placed Mike Crotta on the DL with right posterior elbow inflammation.
For Ascanio, it has been a long road back to the Majors.  He last pitched with the Buccos in August of 2009 after he was traded here from the Chicago Cubs along with Kevin Hart and Josh Harrison for Tom Gorzelanny and John Grabow.  Jose spent the 2010 season rehabbing from arthroscopic surgery on his right shoulder.
He was signed as an undrafted free agent by the Atlanta Braves in 2001.  Ascanio pitched in the Braves’ Minor League system until July 13, 2007 when he made his Major League debut.  Jose finished the ’07 season with a 1-1 record and a 5.06 ERA.  During that offseason, he was traded to the Cubs for Will Ohman and Omar Infante.  He wouldn’t make it back to the big leagues until May of the 2009 season, shortly before his trade to .  For his career in the Majors, he has a 1-3 record with 36 strikeouts and a 4.99 ERA.
So far in 2011, Jose has been on rehab assignment in the Minors, three appearances with Class A Bradenton and seven in Triple-A Indianapolis.  His stats are less than desirable coming off this past assignment.  He posted a 9.00 ERA with eleven walks and five strikeouts.  The Pirates apparently feel that with some time and staying out of pressure situations early on, he can adjust to being in a Major League bullpen.  They are also encouraged by his 95-96 mph fastball.
And…
As Always…
Let’s Go Bucs!