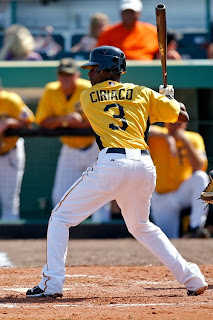 Even though the Pirates’ game was rained out on Friday, the front office was busy making moves.
Josh Rodriguez was designated for assignment, because of the addition of shortstop Brandon Wood, who was recently released by the Los Angeles Angels of Anaheim.  To fill the roster spot until Wood is able to join the club, Pedro Ciriaco was recalled.
Ciriaco was signed as an amateur free agent by the Arizona Diamondbacks in 2003.  From 2005-10, he moved his way up through the Diamondbacks’ farm system.  Pedro would come to the Pirates, along with Chris Snyder, for D.J. Carrasco, Ryan Church, and Bobby Crosby in July of 2010.  After playing with AAA Indianapolis, he made his Major League debut on September 8, 2010 and played in a total of eight games to finish the season.
Even though Ciriaco is able to play a variety of positions, his time in looks to be short.  Once Brandon Wood walks through the clubhouse doors, Pedro most likely will be sent back to Indy.  Stay tuned to Fans From The Stands for information on Wood once his place on the roster becomes official.
And…
As Always…
Let’s Go Bucs!