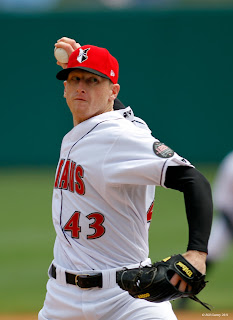 On Friday, Evan Meek returned to the disabled list with tendinitis and a small tear in the labrum of his pitching shoulder.  He was placed on the 15-Day DL and has been quoted as saying that the injury will not require surgery.  To fill his spot on the roster, the Pittsburgh Pirates called up relief pitcher Tim Wood from the AAA Indianapolis Indians.
Tim was originally drafted by the Florida Marlins in the 44th round of the 2002 draft.  He would then make his MLB debut on June 25, 2009.  After being released by the Marlins at the end of last year, he would begin spring training with the Washington Nationals, before being released and signing a minor league contract with Pittsburgh.  Before this year he has appeared in 44 games with a 1-1 record, an ERA of 4.18 and 1 save.  In the two days that he has been with the Buccos he has pitched in 2 innings allowing one hit and one walk.  Before coming up from Indianapolis, he had 13 saves and a 2.96 ERA, while not allowing a home run in 23 appearances out of the Indians bullpen.
While injuries have become common over the past few weeks for the Pirates, they continue to play well this year as a team.  Young arms like Wood will have to pitch at a high level if Pittsburgh hopes to break their streak of 18 straight losing seasons.  Stay tuned to Fans From The Stands for more roster updates throughout the 2011 season.
And…
As Always…
Let’s Go Bucs!!!