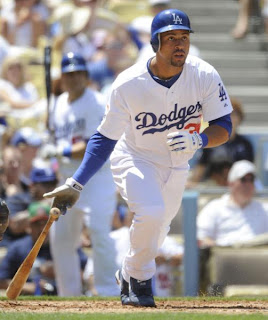 On Tuesday, the Pirates added outfielder Xavier Paul to the roster after claiming him off of waivers from the Los Angeles Dodgers.  Paul joined the club prior to Thursday’s afternoon game against the San Francisco Giants.  In order for Xavier to have a roster spot, designated outfielder John Bowker for assignment.
Paul is a former fourth round draft pick in 2003 of the Dodgers.  In 2004, he was selected by Baseball as having the best outfield arm in the Dodgers’ system and hit .262 for the Columbus Catfish that season.  In ’05 and ’06 he played for the Vero Beach Dodgers and Baseball America named him the best defensive outfielder in all of Single-A.
He then spent the ’07 season with Double-A Jacksonville and ’08 with the Las Vegas 51’s hitting .316 in 115 games.  Xavier may be most known for being called up to the Dodgers as Manny Ramirez’s replacement when he was suspended for steroid use.  Shortly after this, he was sidelined with a staph infection and then an ankle injury caused him to miss the rest of the season.
2010 saw him once again in Dodger blue, but only for 44 games, in which he hit .231.  He returned to AAA when another ankle injury would prevent him from being a September call up with .
As a member of the Pirates, Paul will be their fifth outfielder and used mostly off the bench as a pinch hitter and a defensive substitution.
And…
As Always…
Let’s Go Bucs!