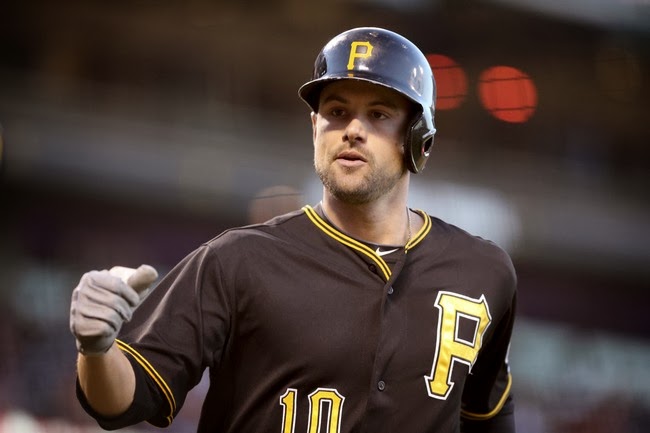 The Pittsburgh Pirates carried the momentum of a series victory over the Los Angeles Dodgers into tonight’s game against the San Diego Padres.  The Bucs tallied 16 hits, led by Jordy Mercer and Neil Walker, on their way to a 10-3 victory in the first game of a three game series at Petco Park.

Charlie Morton earned his second win of the season, giving up two runs on three hits with nine strikeouts in five innings of work.  The Bucs’ bullpen came in and kept the Padres’ hitters at bay for the most part throughout the evening.

The Pirates took the lead in the third inning off Padres’ starter Tim Stauffer.  Mercer led off the inning with a majestic solo homerun to left field.  Later in the inning the Bucs loaded the bases for Ike Davis, who hit a sacrifice fly, scoring Josh Harrison from third base to push the lead to 2-0.  Two batters later, with the bases loaded again, Pedro Alvarez struck out swinging to end the inning.

The fourth inning was a frustrating one for the Pirates, even though they did score another run.  Starling Marte was hit by a pitch to lead off the inning, stole second, and scored on an RBI single by Mercer.  But after loading the bases once again, the Bucs couldn’t take advantage.  Andrew McCutchen grounded into an inning-ending double play.

Morton ran into trouble in the fifth inning, resulting in two Padres runs.  Everth Cabrera doubled home Alexi Amarista, who led off the inning with a single.  Later, Seth Smith’s RBI single scored Cabrera, bringing the Padres within a run.  But with the bases loaded and two outs, Morton struck out Tommy Medica to end the inning.

Pittsburgh answered in the sixth inning with a run on an RBI single by Walker, scoring Mercer from second base to increase the lead to 4-2.  But the inning ended on a sour note for the Bucs.  After loading the bases again, the Pirates once again failed to convert as Russell Martin struck out looking to end the inning.

The Bucs broke things wide open in the eighth inning.  Gaby Sanchez hit a pinch hit, two run double, and McCutchen’s ground rule double scored Sanchez to bump the lead to 10-3, which would be the final.

This was a great start to the series for the Pirates.  They are on the verge of putting together a VERY successful road trip, and they have now put themselves in position to win this series.

The Pirates and Padres will get back at it tomorrow night at Petco Park.  First pitch is scheduled for 10:10pm.