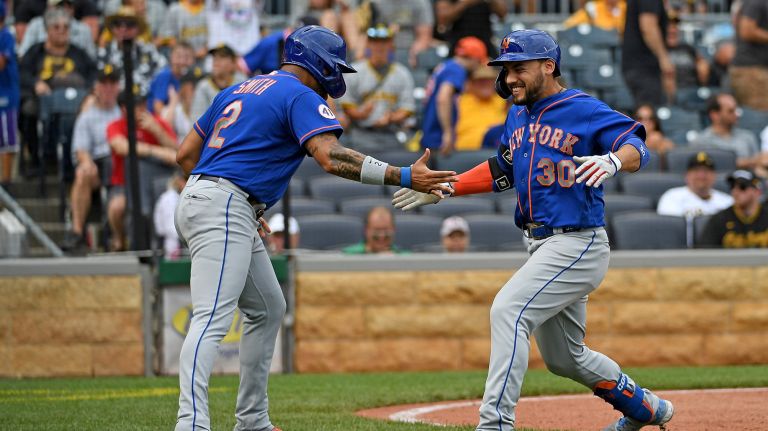 The Pittsburgh Pirates had an opportunity to do something that they have not done since August of 2020.  Sweep a series.  After a six run first inning, they looked to be well on their way to accomplishing that feat.  But as we learned last night, no lead is safe especially a six-run lead.  The New York Mets would use the remainder of the game to battle back and capture a 7-6 victory to close out the season series.

Pittsburgh got their bats rolling right from the get go.  Bryan Reynolds started the scoring with an RBI single to right.  Reynolds and Ben Gamel would score on a John Nogowski double to left.  Up next would be a crazy play that will go down in baseball history.  With the bases loaded, Kevin Newman put a ball in play that began foul and came back onto the foul line.  Just as it touched the line New York pitcher Taijuan Walker thought he smacked it foul with his glove towards the Pirates dugout, but since it was fair and no one went to get the ball, all three runs would score and Newman would end up on second.

The Mets comeback would begin in the third inning on a Dominic Smith infield single to bring in Brandon Nimmo.  They would get three more runs in the fourth on a Travis Blankenhorn home run.  A throwing error by Gregory Polanco in the sixth led to New York getting back to within one in the sixth.  They would complete their comeback in the ninth with a two-run home run by Michael Conforto.

This was a tough loss after such an exciting win last night.  JT Brubaker had a lackluster start going only 3.2 innings allowing four runs on six hits with three walks and five strikeouts.  There has been talk of limiting his innings since he has already surpassed his highest innings pitched totaled at the Major League level.  Aside from Richard Rodriguez blowing the save in the ninth, the bullpen was solid over their 4.1 innings of work.  It was also a shame to see the offense not be able to add on during with the multitude of opportunities they had after that first inning.

History was also made today.  This marked the first time in National League history that a team came back from six runs down one night, only to blow a six-run lead the very next day.  With this short homestand now over, Pittsburgh will play their next six games on the road.  Up first is a three-game series at Chase Field against the Arizona Diamondbacks beginning Monday night.