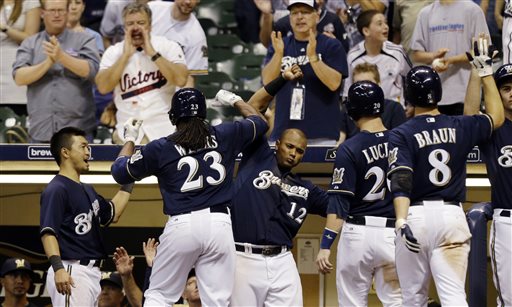 It was a home run derby at Miller Park tonight and for the Pittsburgh Pirates that was not a good thing.  The Milwaukee Brewers went deep three times enroute to a 12-8 victory.

For the first seven innings of this game it looked like a boxing match as each team was able to answer the other teams best shot.  The Buccos opened up the scoring on an RBI single by Andrew McCutchen in the first inning. That was answered by the Brew Crew in the second when they plated two runs.

Gaby Sanchez hit a two run homer in the third to give Pittsburgh the lead.  That would be short lived as Milwaukee tied it up in the bottom part of the inning.  When the Brewers came to bat again one inning later, they would score three runs to go on top.

The Pirates cut into that lead in the fifth on back to back solo home runs by Russell Martin and McCutchen.  The Buccos used a three run dinger by Starling Marte in the sixth to take a one run lead.  But, like they did all night the Brew Crew answered, this time on a solo homer that tied the game.

After that, Milwaukee delivered the knockout blows that finished off Pittsburgh.  A solo homer in the seventh and a three run homer in the eighth would be too much for the Pirates to handle on this night.

In a game where the teams combine for twenty runs and twenty-nine hits, pitching was obviously a problem.  Starter James McDonald had rough five innings of work allowing seven runs on eight hits, while walking five and striking out three.  The bullpen was unable to stop the bleeding, like they usually have this year.  Four relievers were used tonight to finish off the final three innings of work.  In that time they allowed five runs on seven hits while walking two and striking out one.

At this point it is best not to try and figure out why the Buccos have so much trouble in Milwaukee.  They really need to avoid the sweep tomorrow and of course that will not be an easy task.  Jeanmar Gomez gets the spot start for Pittsburgh tomorrow, with Johnathan Sanchez being designated for assignment earlier in the day.  He will face Hiram Burgos at 1:10pm.