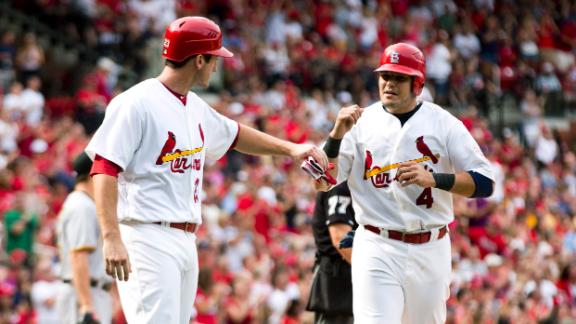 There are two ways to look at the Pittsburgh Pirates 5-4 defeat against the St. Louis Cardinals.  One is to be upset at the many missed opportunites this team had to earn a W, or take a look back at the past 19 losing seasons, and take solice in the fact that these Buccos battled all game long.

Considering the way the last home stand went, I like how Pittsburgh played today even in defeat.  It was a back and forth contest that saw the Cards never trail.  While both starting pitcher lasted only through the fifth inning, neither team was able to capitalize and produce a big inning.

With the score tied at one, Andrew McCutchen stepped to the plate with runners on second and third, but Cutch would go down swinging to end the inning.  This was a bad day for McCutchen as he would go 0-4 while leaving a game high six men on base, with two K’s and an RBI.

Pittsburgh was given a key opportunity to make noise in the top of the fourth.  They would have one out and the bases loaded, but the bottom part of the order was up, which saw Clint Barmes and Erik Bedard strike out swinging.   St Louis would regain the lead in the bottom part of the inning on a two RBI double by Shane Robinson.  The Pirates answered in the top part of the fifth when Jordy Mercy doubled in Starling Marte and then Garrett Jones scored Mercer on a sac fly.

The Cardinals wasted no time regaining that two run lead in the bottom part of the inning on a bases loaded ground rule double by Yadier Molina.  That would be it for Bedard as he would go 4 2/3 giving up five runs on nine hits, while walking three and striking out four.  Jared Hughes finished off the inning along with the sixth and seventh without giving up a run or a hit.

More wasted opportunites came in the final third of the game.  In the seventh a lead off double by Gaby Sanchez went unused as the next three batters produced outs and he was stranded at third.  In the eighth the first two batters singled, but a pair of strikeouts and a flyball made quick work of any momentum.

The ninth presented a huge chance for the Buccos to blow this game open and take the series.  Bases loaded no outs for McCutchen and he grounded into a force out that scored a run to cut the St. Louis lead to one.  With runners on the corners, Jones had a 3-0 count, but closer Jason Motte battled back to earn a K, that led to Josh Harrison hitting a sharp ground ball to third for the final out.

The bad thing about the loss was that the Pirates had their big guns like Cutch, G.I., and Pedro up at key times and none of them were able to break the game open.  Pedro finished the day 0-3 with three K’s and a walk.  The best source of offense was Mercer going 2-4 with two RBI.  He was hit by a pitch in the ninth and had to have the athletic trainer look at his hand before staying in the game.  Marte left the game with sorness in his side.  Hopefully neither of these are serious, because the Pirates are already down a player in Neil Walker.

The rubber match of this battle for the final Wild-Card spot is set for tomorrow afternoon at 2:15pm.  Jeff Karstens goes for Pittsburgh, while St. Louis will counter with Jaime Garcia, who is making his first start in nearly two months.